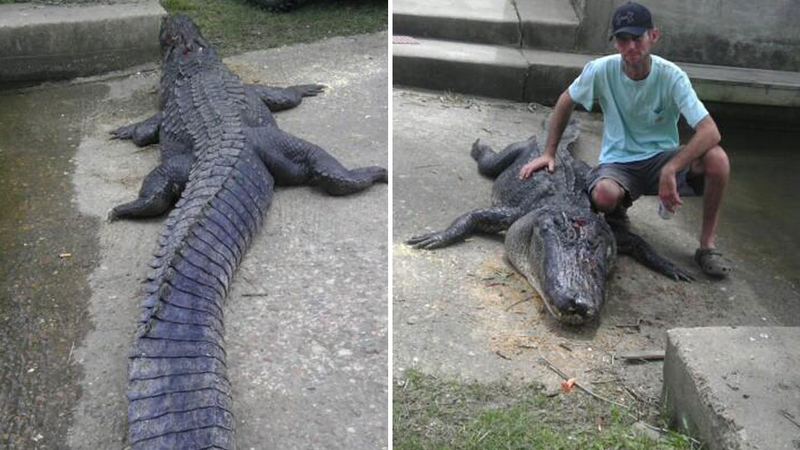 Kent Robnett says he trapped the 11 foot, six inch gator himself, then shot it in the head.

"I knew I was breaking the law," he said.

The story has put the tiny town of Orange in the national spotlight. On Friday, an alligator killed 28-year-old Tommie Woodward. He was swimming when the gator dragged him under the water.

The next morning, Robnett set a trap.

A few days later, the alligator was dead. Robnett called the game warden immediately, knowing what he did was punishable by a fine of up to $500.

"I said the shooter would like to remain anonymous," he explained.

An autopsy revealed he had gotten the right gator. Then, suddenly, others started claiming responsibility. In fact, the local newspaper even reported a confession from a man known only as "Bear."

"I just thought I'd throw my name out there," said Russel Uher, who calls himself "Bear."

The district attorney says he's been hearing from people who passionately support and oppose Robnett's actions.

Authorities haven't decided yet whether to ticket Robnett.

"You would love to be able to just present this to a jury and say we need an answer to this and the best person to answer this is the community and the jury is a representative of the community," said DA John Kimbrough. "Whatever their answer is the right answer."

"I know I did the right thing, but I would not suggest anybody doing what I did," Robnett said. "The best thing they can do is call their local authorities and let them deal with it."

Meanwhile, many in the neighborhood are raising money to help pay the fine. They have a barbecue benefit dinner planned for this weekend.