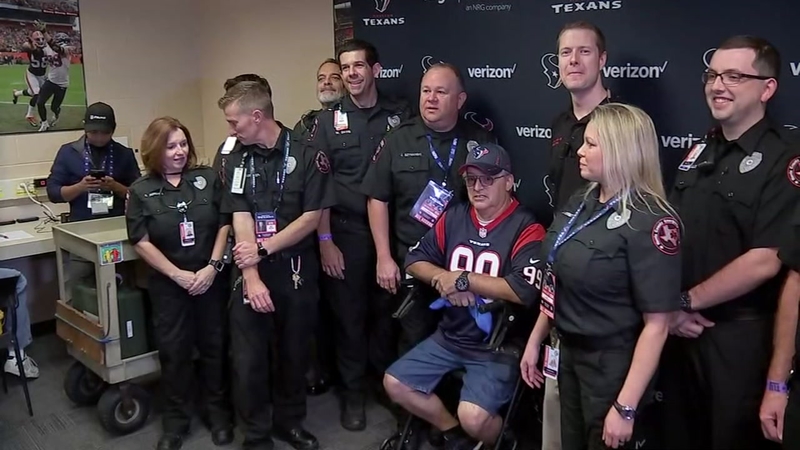 Texans fan grateful to paramedics who saved his life

HOUSTON, Texas (KTRK) -- A Texans fan that suffered a heart attack during the preseason, returned to NRG Stadium to thank the medics who saved his life.

While the Texans took on the San Francisco 49ers in the preseason, the action wasn't only on the field. In the stands, work was underway to save a man's life.

During the game, Donald Stampley suffered a heart attack. After weeks of recovery, he returned.

"There is no words," Stampley said. "I mean, you can thank them from the bottom of your heart, but that's all you can really do."

Harris County Emergency Corps employees were on the field during the game. When they heard a fan had an issue, they sprang into action.

"Actually, we had to climb an 8-foot wall to get to him quickly since we were on the field and he was in the second row," Harris County Emergency Corps Medical Director Dr. Cameron Decker said.

Decker said Stampley went into cardiac arrest, but what saved his life is how other fans immediately performed CPR.

"It's so important for absolutely every one of our citizens to be skilled in CPR so that they can save a life," Decker said.

Stampley wasn't the only one saying thank you Sunday.

The medics were also being honored at the Texans game.

"This is exactly why I became a physician, why our medics became paramedics, to save a life. To be a part of saving someone's life is an experience like no other," Decker said.

For Stampley, the feeling of being saved is unfortunately one he knew before the game.

"I had a heart attack in the cardiologist office," Decker said. "That's two strikes. I don't want the third one."

It's a joke Stampley can tell thanks to the team that saved his life a second time. The same group of medics also presented him with an autographed J.J. Watt jersey. It's a nice jersey, but Stampley said he has a new favorite team.