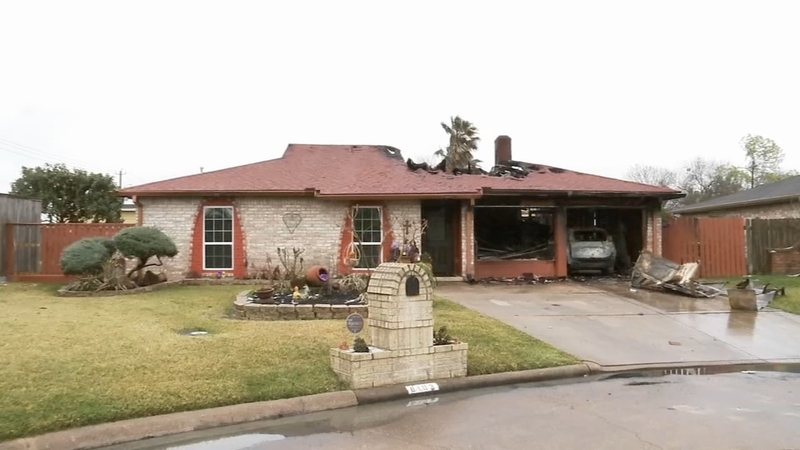 Woman with no home insurance loses house in fire

Life is a struggle for millions of Texans right now, but they are managing to keep their faith above all else.

"I lost everything. I don't have anything. What you see to my left that's it," said Houstonian Alice Denson.

Denson left her house with only a few clothes after her home became unbearably cold. She and four other relatives would have been sound asleep inside had they stayed one more night.

"Five of us would have burned up," Denson said bluntly.

She strongly believes her husband Charles, who recently passed away, was looking over them. Just hours after leaving the home, the power kicked back in but the blaze quickly ignited. Prized possessions from Denson's husband, a Marine Vietnam vet, are now gone forever.

"I lost his vet's notebook, pictures, his certificates, his rewards, his flag ... everything," the heartbroken woman said.

Meanwhile, in Richmond, a separate family went through a different struggle.

"As soon as we get to the stairwell, we hear it pouring down," said Patrick Carter. "We're scrambling, 'How do we turn this water off?'"

Patrick and Brittney Carter arrived to find bursted pipes at a home for their nonprofit calledLife's Purpose Youth Foundation. It happened at one of two residential treatment centers.

"Our goal is to help the children get reunited with families, be adopted, or go into a foster setting," said Brittney.

Thankfully, no one was injured. Brittney said the children have been extremely resilient through the pandemic and now, a historic winter storm.

"We had one kid come over and help us from beginning to the end," she said.

Though the clean-up will continue past the storm, the Carters said they still feel blessed through it all.

She said she, too, is feeling blessed despite losing everything. She believes her late husband is her guardian angel.

"He was the most important thing in my life. He always will be," she said

A GoFundMe has been set up to help Denson with expenses.