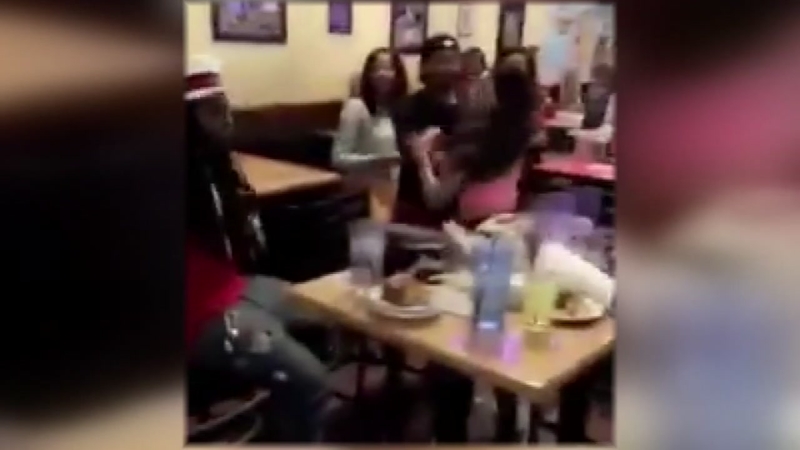 Brawl breaks out after Texans-Cowboys game.

BAYTOWN, Texas (KTRK) -- It started out as a friendly crowd of people watching Sunday Night Football at Bayou City Wings in Baytown. It ended up with seven people booked into the Baytown City Jail.

By the time the Texans finished talking about their overtime win over the Cowboys, video of the brawl was already spreading on Facebook and Snapchat.

"The Texans fan was going to leave, when he was leaving, the other group started talking, got argumentative. At that point, the bartenders asked them to pay their tab and leave," Bayou City Wings Manager Max Thweatt recounted the story.

"The next few minutes we kept asking them to leave. Then, they started throwing punches. So we called police."

Texans and Cowboy fans get in bar brawl.

In various videos posted online, several men and women could be seen arguing and throwing punches in the bar. Soon the fight spilled outside.

Of the seven people arrested, several were related to each other. Michael Hopson appears to be the only person not actually there at the beginning of the fight.

"I was home watching my baby, and my girlfriend called," said Hopson, whose girlfriend and sister were among those at the bar. Hopson said the women called him to come to the bar because they were being harassed.

"I think I was here maybe three minutes, at most. Pulled up, got out of the car, went to the front, and got arrested all in three or four minutes."
SEE ALSO: Caught on camera: Couple's fight at Baytown restaurant goes viral

Hopson's girlfriend and sister were also among those arrested. All were charged with Class C misdemeanors.

"Everyone was charged with disorderly conduct, fighting, language, and public intoxication," said Lieutenant Steve Dorris, of the Baytown Police Department.

All seven have also been banned from the bar.