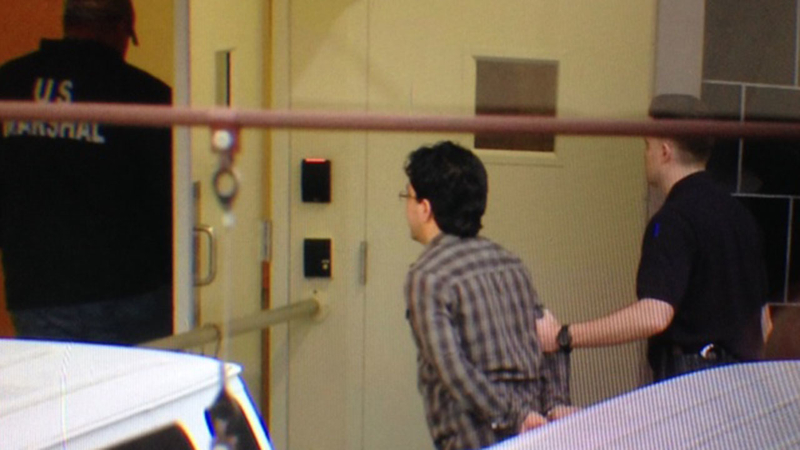 HOUSTON (KTRK) -- A man arrested on three terror-related charges faced a federal judge for the first time in Downtown Houston.

Omar Faraj Saeed Al Hardan, 24, arrived to the federal court building for his 10am hearing and required a translator to communicate.

Al Hardan is a Palestinian born in Iraq, but has lived among us since November 2, 2009 when he entered the United States as a refugee. He was also granted status as a permanent legal resident around August 22, 2011.

The man told the judge that his mother and father also live in Houston.

Prosecutors say Al Hardan has been assisting ISIS with material support and resources since at least May of 2014. He now faces three charges including the attempt to provide material support to ISIS, procurement of citizenship or naturalization unlawfully, and making false statements to investigators.

Al Hardan allegedly misrepresented himself as not having associations with any terrorist organization when prosecutors say he in fact was connected to members and sympathizers of ISIS throughout 2014.

The six-page indictment which was unsealed overnight also alleges that Al Hardan also stated he never received any type of weapons training. Prosecutors say that statement was false, and that Al Hardan had received training on how to fire an automatic machine gun.

Al Hardan was arrested Wednesday at the Office of Homeland Security, but officials would not go into details about the arrest. What we do know, however, is that prosecutors now believe Al Hardan did not plan a specific attack in the Houston area.

A bond hearing is set for next Wednesday, where witnesses and more testimony is expected in the case.

Al Hardan faces the possibility of spending 20 years in a federal prison and a fine of $250,000 on the charge to provide support to ISIS alone. The charge of procuring false citizenship carries a maximum sentence of 25 years in prison.

The U.S. Attorney's Office says it is working to connect Al Hardan to another refugee who was arrested in Sacramento on terror charges, but would not elaborate.

Aws Mohammed Younis Al-Jayab, 23, of Sacramento, is accused of traveling to Syria to fight and then lying to investigators about it, reports KGO-TV.

"International terrorism is a high priority of my office," says U.S. Attorney Kenneth Magidson. "We worked closely with the FBI Terrorismk Task Force to ensuring the safety of the public in these matters. We will do everything we can to make sure cases of this ilk are brought to justice."

Keep checking back on this page to get real-time updates as this story unfolds.

To get alerts for breaking news, download the ABC-13 news app for iPhone or Android. You can also get breaking news alerts sent to you by email.