Teens in stolen SUV cause crash that kills woman: HPD 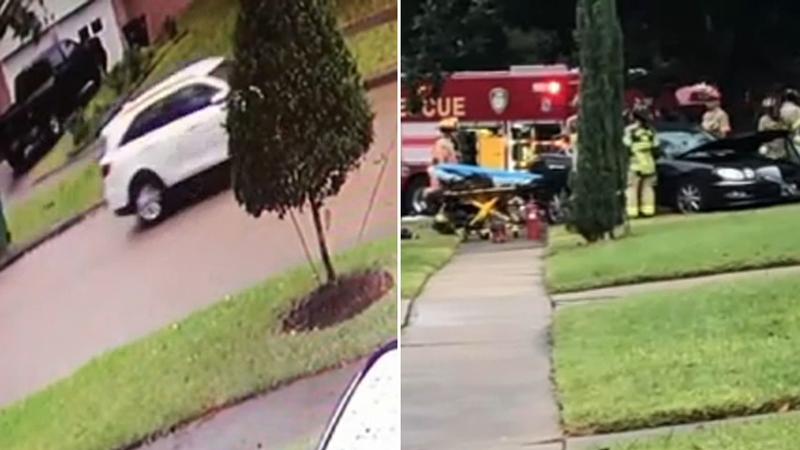 HOUSTON, Texas (KTRK) -- An innocent driver was hit and killed by two teenage robbery suspects speeding through a southwest Houston neighborhood in a stolen SUV, according to police.

Investigators say the 15-year-old driver, with a 16-year-old passenger, was speeding and ran a stop sign. He crashed into a sedan driven by a woman who was two blocks from her home. The impact knocked her car up into a yard. Houston firefighters worked to extricate her, but it was too late.

HAPPENING NOW: Investigators on the scene of a deadly crash. An innocent female driver was killed by underaged armed robbery suspects. The driver of the van is 15 and will be charged with felony murder says @HarrisCountyDAO #abc13 pic.twitter.com/02RTHXCs9K

Neighbor Carmen Hernandez said officers worked to revive her for 10 to 15 minutes.

According to HPD, undercover officers had the stolen vehicle under surveillance. They believe the suspects are part of an armed robbery crew who have terrorized the area. The plan was to initiate a traffic stop when the SUV started moving. Instead, the suspects turned down Troulon and this is where there are some questions.

"They saw them turn down this street, and before they could get here, they were involved in the accident," explained HPD Executive Assistant Chief Bobby Dobbins.

Police say they were not chasing the suspects' vehicle. However, surveillance video obtained by Eyewitness News from two different homes shows three marked units with their lights on following the SUV closely behind. It appears the teens were trying to get away when they crashed into the victim's car. HPD says regardless, it does not change what the young suspects have ahead of them.

"Tonight, we're talking about a felony murder of a woman at 4 p.m. who was just driving home," said Sean Teare, Chief of the Vehicular Crimes Division with the Harris County District Attorney's Office.

The woman's name has not been released.

The 15-year-old faces a felony murder charge. His passenger faces a charge of aggravated robbery. Their names have not been released because they are juveniles.

A deadly crash involving two vehicles in southwest Houston has killed a driver, and police say one of the vehicles had robbery suspects inside.