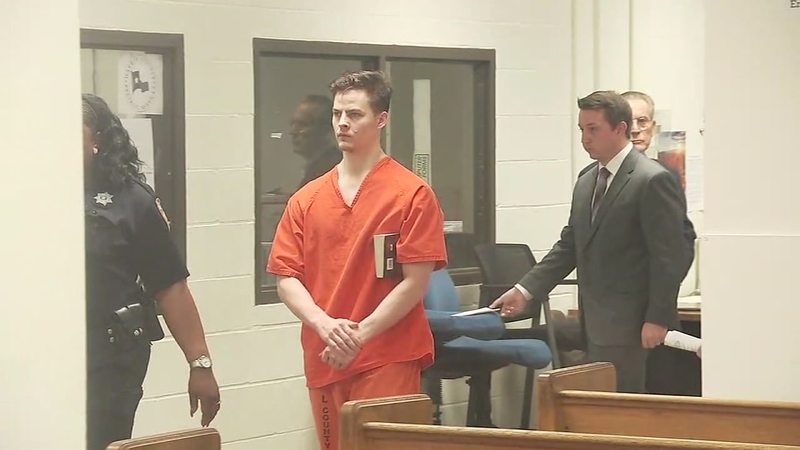 CYPRESS, Texas (KTRK) -- A suspect arrested in North Carolina nearly two weeks ago for a shocking 2013 crime is now back in Harris County.

FIRST LOOK: With a bible in hand, this military member is back in Houston after being charged with attacking a Cypress teen in 2013. Here’s more on the case: https://t.co/NOON2DYZ8P pic.twitter.com/YDpBLEojWd

Levi Goss, 24, is charged with aggravated kidnapping and aggravated sexual assault of a child.

Goss faced a Harris County judge Tuesday night and his bond was set at $1 million.

"I disagree with that," defense attorney George Parnham said. "Fairness is not in the mind of the beholder, it's whether or not he can make that bond, which of course he's not going to be able to."

A 16-year-old girl was found naked and bleeding in a movie theater parking lot in Feb. 2013. The victim told investigators she'd been sexually assaulted and beaten.
"This individual was brutally assaulted that night," Lt. JD Philpot said. "Hit in the head numerous times and she's still suffering from brain trauma."

Records show Goss lived near the crime scene in 2013.

The girl, who was rushed to the hospital by helicopter, told officers she was sexually assaulted in a wooded area in front of the school, then hit on the head with a blunt object that she described as a hatchet. The victim reportedly eventually played dead in an effort to get her attacker to leave her alone.

Goss' attorney hasn't spent much time with him.

His client clung to a bible during Thursday's hearing.

"I know he's scared, obviously, " Parnham said. "He's an individual back in jail, of course, and that is scary to anybody."

Goss was taken into custody in Cumberland County, North Carolina, where he was held on $1 million bond until he was transferred to Harris County. He is expected to go before a judge here.
A member of the U.S. Army, Goss was stationed at Fort Bragg in North Carolina, where he is being investigated by military authorities in connection with another sexual assault case.