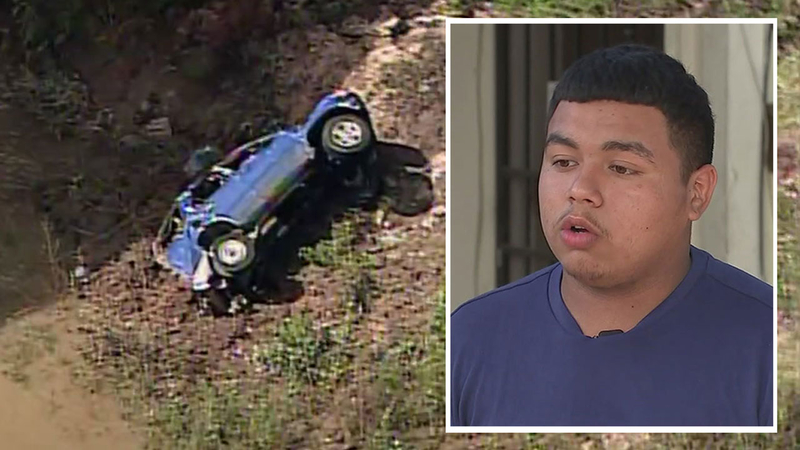 Teen still in shock after SUV flips off Grand Parkway

Albert Calderon, 18, said by the grace of God, he and his three friends survived a horrific car accident Monday near New Territory.

"We flipped five times," he said.

Three people were injured Monday when a car crashed off the Hwy 59 Brazos River bridge.

They were on Highway 99 in Sugar Land when Calderon was about to steer into a left-hand lane, but his best-friend Isiah noticed a car in his blind spot and pulled on the steering wheel.

But then, Calderon pulled it back hard, causing him to lose control of his SUV.

"It was like a roller coaster, I just held on tight and started flipping," Albert said.

The SUV then hit the guardrail.

"I could hear them scream," Albert recalled.

Calderon remembers going over the embankment and seeing the Brazos River as they nose-dived 75 feet.

"I grabbed on to my friend and I grabbed on to steering wheel, and I just closed my eyes and I told myself, 'Fixing to die, I'm fixing to die,'" he said. "While I was in the air, I fainted, I passed out, so I really don't know how we hit the ground."

Calderon remembers waking up and seeing his friend bloody and passed out. He cut his fingers after crawling out of the windshield to get to his friends.

Eventually, help arrived and one of his friends was taken to the hospital by air. However, it was a true unbelievable miracle all four survived with minor injuries.

"Anything can happen on any moment," he said. "Thank God that we're alive, you know."