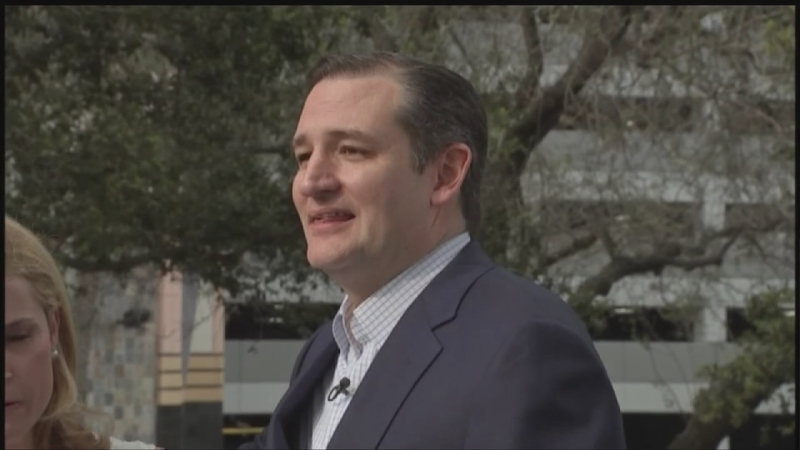 HOUSTON (KTRK) -- Texas Senator Ted Cruz welcomed supporters and the media to his first public appearance in Houston as a presidential candidate.

Cruz was the first to jump into the 2016 race, filing the official paperwork, announcing his campaign on the social media site Twitter, and delivering a speech to close to 10,000 people at Liberty University in Lynchburg, Virginia. His national campaign headquarters is in southwest Houston. It is now the hub for an effort that seeks to raise $40 to $50 million for the Republican primary season and to corner the market on social conservatives.

Mark Jones, the political science chair at Rice University, says Cruz has done a good job of defining who he is as a politician and who he will be as a candidate.

Jones says Cruz will make every effort to out-conservative others in the field. And example is his public support, this week, of a controversial Indiana religious freedom law. Opponents contend the law allows businesses to discriminate against homosexuals. But as the state's Governor was defending his decision to sign the law, and backtracking on his position, Cruz was out front supporting him.

"Governor Pence is holding the line to protect religious liberty in the Hoosier State," Cruz wrote in a statement his campaign released late Monday night. "Indiana is giving voice to millions of courageous conservatives across this country who are deeply concerned about the ongoing attacks upon our personal liberties. I'm proud to stand with Mike, and I urge Americans to do the same."

There are currently similar bills in both houses of the Texas legislature, which Jones suggests have no chance of becoming. Even if one passes the Senate, Jones says the House won't agree to it.

As for Cruz, Jones says the 44-year-old, first-time presidential candidate is off to an impressive start raising money.

"He knows he's not going to be able to match Jeb Bush with hundreds of millions dollars," Jones contends, "but he needs to very quickly show that he can match up with Rand Paul and Marco Rubio and Chris Christie and show that he can raise enough money that he can be competitive and viable."

A Houston fundraiser tonight at Goode's Armadillo Palace on Kirby Drive is a minimum $1,000 per ticket. It's $50,000 a person to join what the campaign calls the "Host Committee."