Ted Cruz and wife pushed out of restaurant by Kavanaugh protesters 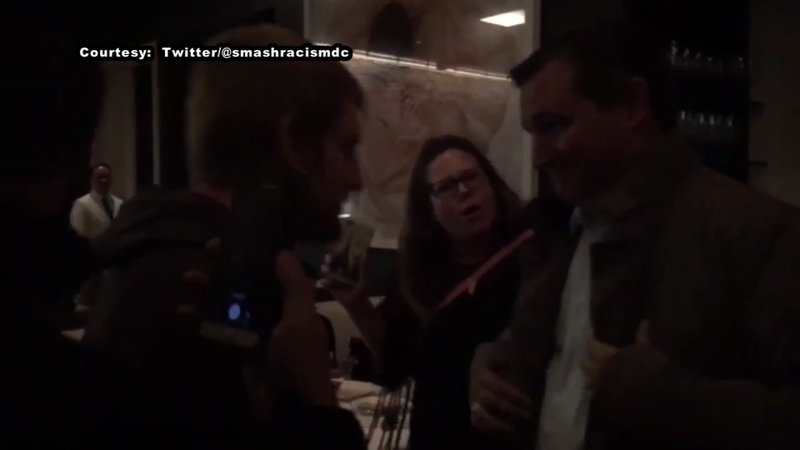 WASHINGTON, D.C. -- Sen. Ted Cruz and his wife were heckled out of a D.C. restaurant Monday night by protesters demanding to know how the Republican senator will vote on Judge Brett M. Kavanaugh's nomination to the Supreme Court.

Smash Racism D.C. shared two videos from the protesters around 10 p.m. as the group chanted at the Texas senator, "We believe survivors."

One man can be heard saying, "Beto is way hotter than you, dude!" Rep. Beto O'Rourke, Texas Democrat, is running against Mr. Cruz for Senate.

The first video captures a woman identifying herself as a constituent and sexual assault survivor and asking Mr. Cruz how he would vote on Judge Kavanaugh.

"I have a right to know what your position is on Brett Kavanaugh," the woman said.


She stressed that she knew that the two were close and wanted to know if Mr. Cruz had talked with Judge Kavanaugh about the allegations against him.

"There are people now that have come forward and who have said Brett Kavanaugh has attacked them," she said.


Judge Kavanaugh was first accused of sexual assault by California professor Christine Blasey Ford who came forward more than a week ago. She claims that he was "stumbling drunk" when he trapped her in a bedroom and assaulted her at a party while they were both in high school. She and Judge Kavanaugh will testify about the allegations on Thursday.

A second accuser, Deborah Ramirez, came forward on Sunday. In a New Yorker article, Ms. Ramirez alleged that Brett Kavanaugh exposed himself to her at a party in their freshman dorm when they attended Yale.

Mr. Avenatti's client has not come forward publicly yet. The only information he's shared is that she has information about Judge Kavanaugh's high school conduct and she worked in the federal government for years.

Judge Kavanaugh has denied all allegations against him.