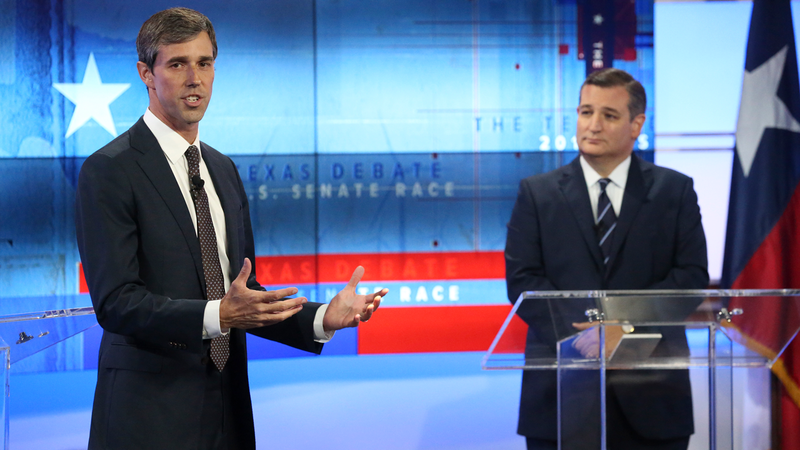 SAN ANTONIO, Texas (KTRK) -- Cold and rain descended on San Antonio on Tuesday, but inside a television studio, the temperature rose quickly in the second debate between incumbent Sen. Ted Cruz and Rep. Beto O'Rourke.

The Democratic challenger O'Rourke characterized Cruz as an absent senator who lies. The incumbent Republican Sen. Cruz called O'Rourke an extremist who is out of step with Texas.

This debate covered a wide range of issues, including abortion and the Supreme Court.

"On the question of life," Cruz said, "Congressman O'Rourke is on the extreme pro-abortion side. So he had repeatedly voted in favor of late term abortions."

O'Rourke countered, "I will only vote for a Supreme Court justice who believes in a woman's right about her own body."

They also discussed trade and the burgeoning trade war between the United States and many of its trade partners.

"I am against tariffs and I'm against a trade war," said Cruz. "I have made the case repeatedly to President Trump that in trade we should be expanding our access to foreign markets."

"You are all talk and no action," the El Paso congressman said. "The tariffs the President has levied. The trade wars that he has entered this country into is hurting no state more than it's hurting Texas."

Healthcare, an issue atop the concerns of Texans regardless of party affiliation, also demonstrated the divide between the candidates.

"We want to make sure everyone can see a doctor," said O'Rourke, "Afford their prescription medication, take a child to a therapist, to be well enough to live to their full potential."

Cruz said the proposal amounted to an increase in taxes that Texans can't afford.

"Congressman O'Rourke is proposing socialized medicine," he said, "The federal government in charge of your healthcare and your doctor."

Then it got heated.

"He's dishonest," O'Rourke said of Cruz. "That's why the president called him 'Lyin' Ted' and it's why the name stuck, because it's true."

"It's clear Congressman O'Rourke's pollsters told him to come out on the attack," Cruz shot back. "If he wants to insult me and call me a liar, that's fine. But John Adams famously said, 'Facts are stubborn things.'"

This is the lasting image of the campaign: two candidates on stage one final time before voters make their choice.

The next big events for both candidates? O'Rourke has a big rally in The Valley on Thursday. Cruz has one with President Trump in Houston on Monday.

Watched the debate last night & Beto O’Rourke, who wants higher taxes and far more regulations, is not in the same league with Ted Cruz & what the great people of Texas stand for & want. Ted is strong on Crime, Border & 2nd A, loves our Military, Vets, Low Taxes. Beto is a Flake!