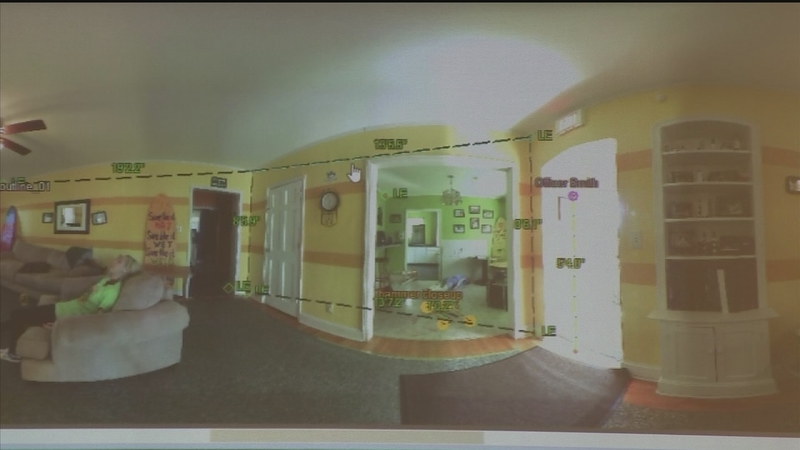 HOUSTON (KTRK) -- Snapshots have helped paint the picture of crime scenes for decades but investigators with the Houston Forensic Science Center are testing new technology at crime scenes right now.

It's groundbreaking and Vice President of 3rdTech Inc. Doug Schiff says, "It is like visiting the crime scene."

The new technology gives prosecutors in the courtroom the ability to take jurors back to that day and see exactly what first responders saw.

"You can show what an officer, victim or defendant would see from a particular location at the scene. It's really pretty remarkable," Schiff said.

Our Eyewitness News crew saw the demonstration and a flyover shows the first victim of a triple homicide on a sidewalk in front of a home. Inside the door you can see two more victims in different rooms. Investigators have the ability to even zoom in on a possible murder weapon. In this staged scene, there is a hammer on the floor. The "victims" are two student volunteers and a mannequin.

"It's similar technology in what you would find in a video game except that it's real," Schiff said.

The Crime Scene Unit at the Houston Forensic Science Center is training to use the Faro 3D Laser Scanner. Schiff teaches the class.

The device does a 360-degree scan of a crime scene, collecting millions of measurements to help with scene reconstruction.

Crime Scene Investigator Andy Taravella says it can save them time and capture even more information.

"It's some of the highest technology we've ever used, it's the trend of Crime Scene Investigation for the future," Taravella said.

A laser and mirror rotate using line of sight to capture precise measurements.

The scanner goes around a second time for pictures and the information is all merged together to create the 3D scene.

From bullets to blood the crime scene becomes even more real in the courtroom.

"One of the things we hear from prosecutors is that more and more jurors are expecting to see the kinds of things they see on TV," Schiff said.