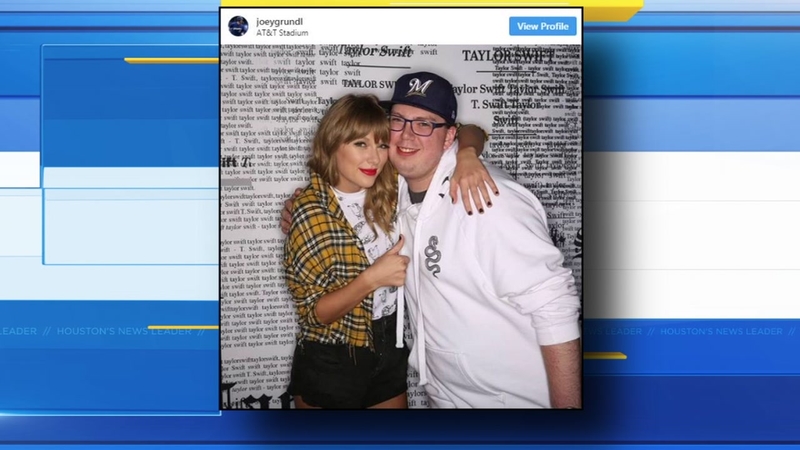 WALDO, Wisconsin (KTRK) -- Not all heroes wear capes. Some of them wear Taylor Swift merchandise.

Joey Grundl from Wisconsin made headlines when he called police after seeing a distressed woman with black eyes and bruises mouthing "help me" inside the apartment where he was delivering pizza.

He dialed 911 after he left and responding officers arrested the woman's ex-boyfriend and charged him with kidnapping.

A day later, Grundl was seen wearing a 'Reputation Tour' hoodie as he was interviewed by the media. Swift's fan base immediately recognized the merchandise and began tagging her on social media in hopes to gain her attention.

Swift saw the story and arranged to meet Grundl at her concert in Arlington.

"So anyway, I'm legitimately getting emotional and I almost never get like this, but as the likely most memorable week of my entire life comes to an end, I guess I can really say I'm doing better than I ever was," Grundl tweeted.
Report a correction or typo
Related topics:
societywisconsintaylor swiftherokidnappingrescueu.s. & world
Copyright © 2022 KTRK-TV. All Rights Reserved.
TOP STORIES
Weather Alert Day: Severe Thunderstorm Warning in effect
Hidalgo to release data on gun-related homicides ahead of NRA meeting
Texas' primary runoff election: What to know about voting
Travis Scott faces another lawsuit for 2019 performance, report says
Young Thug rap lyrics used as alleged evidence in RICO indictment
Man found shot to death near homeless camp, HPD says
Baylor to relocate statue of slave-owning former university president
Show More
California parents could soon sue for social media addiction
Family hasn't returned home since 12-year-old shot while asleep
8-year-old was 29 pounds when she died after repeat abuse, filing says
Gas station charges nearly $8 a gallon ahead of holiday weekend
After 3 months, Russia still bogged down in Ukraine war
More TOP STORIES News