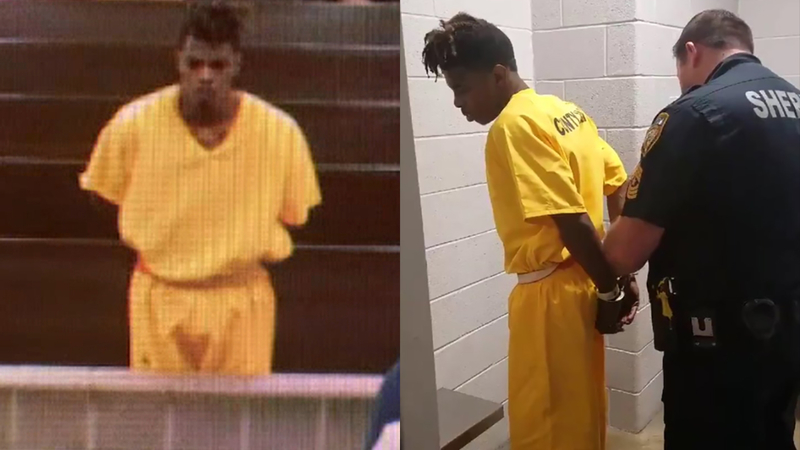 Tavores Dewayne Henderson, 21, was initially charged with felony murder before it was upgraded. He has no bond.

Thursday night, he was given a $150,000 bond during his first court appearance.

He wore his jail-issued uniform inside Harris County Probable Cause Court as the charges were read to him.

On Tuesday night, police said Henderson was in the process of being arrested during a traffic stop in the Clear Lake area town for an outstanding warrant, when he managed to escape officers, get back in his vehicle and hit 43-year-old Sgt. Kaila Sullivan.

In a bit of symbolism, Harris County Sheriff's Office Maj. Mike Lee tweeted a picture of Henderson in handcuffs inside his holding cell.

#Update — Tuesday night when Sgt. Sullivan lost her life, Henderson fled the scene with one handcuff on his wrist. I bet he didn’t know Sgt. Sullivan had another set waiting on him...he’s currently at the @HCSOTexas jail & wearing HER handcuffs while on his way to court tonight! pic.twitter.com/Q8hQS6TfA4

"Tuesday night when Sgt. Sullivan lost her life, Henderson fled the scene with one handcuff on his wrist. I bet he didn't know Sgt. Sullivan had another set waiting on him...he's currently at the @HCSOTexas jail & wearing HER handcuffs while on his way to court tonight!" Lee tweeted.

The $150,000 bond amount was decried by law enforcement leaders in the region.

"A police Sgt dead, suspect on the run for couple days, my team and our law enforcement partners do a phenomenal job locating & taking him into custody without incident- I simply do not understand his initial bond set at $150,000," said Sheriff Ed Gonzales, whose Harris County Sheriff's Office led the investigation since Sullivan's death.

Smh in disbelief. A Police Sgt dead, suspect on the run for couple days, my team and our law enforcement partners do a phenomenal job locating & taking him into custody without incident- I simply do not understand his initial bond set at $150,000. #HouNews

I support reform on non-violent cases, but we must hold the line when it comes to violent crime. I know our current bail system in transition, but public safety/risk is important. We’ve seen examples where money alone does not make us safe, bc if someone can pay they can get out.

"Outrageous! This coward who took the life of a hero & poses a clear & present danger to community & the people we serve. This story is incomplete, what court is this? Bail decisions need to be made on the basis of risk to public safety & of flight," tweeted Houston police Chief Art Acevedo.

"Yes, the judge gave Tavores Henderson a bond for the murder of Nassau Police Sergeant Kaila Sullivan. Henderson was already out on four felony bonds. #EnoughIsEnough This is a slap in the face to law enforcement everywhere," the union tweeted.

Yes, the judge gave Tavores Henderson a bond for the murder of Nassau Police Sergeant Kaila Sullivan. Henderson was already out on four felony bonds. #EnoughIsEnough

Despite the outrage, the district attorney's office explained why Henderson would not have been released, even if he posted bond.

Henderson had a separate aggravated assault charge, but he skipped court so bond for that charge was forfeited.

ABC13 asked why Henderson was not first charged with capital murder.

The district attorney's office said the charge is complex, and that means investigators had to get all of their details nailed down before upgrading the murder charge to capital murder.

"As a member of this community, as someone who holds every single law enforcement agent out there in the highest regard possible and understands how dangerous their job is, there's no question that I can sympathize with their concerns," Teare said.

"What I think is important for the community as a whole to know is there was never a chance that this individual was going to get out prior to us filing this capital murder charge," he continued.

I asked. DA’s office says they had to get all the facts. All the info. Get organized. Before filing the capital murder charge.

Less than 24 hours after Henderson was charged w murder, that charge was upgraded to capital murder.

It's important to note here that Tavores Henderson's bond was revoked on other charges as soon as he was arrested. He IS NOT getting out on any kind of bond. He will remain incarcerated until his cases are adjudicated, he is not going anywhere. #abc13 https://t.co/lh1LjJcPVP

Henderson's Instagram and Facebook videos were discussed in court Friday. Prosecutors spent the last 48 hours looking over the content, saying they prove he's violent, dangerous and another reason they believe he should stay in jail.

Henderson is expected back in court on Monday.

During a news conference Thursday, hours after Henderson's arrest in southeast Houston, authorities said the 21-year-old suspect's mother, Tiffany Henderson, is also being charged with hindering apprehension of a fugitive. She is accused of hiding Tavores since Sgt. Kaila Sullivan, 43, was killed Tuesday night.

The woman's fiancee, Geoffrey Wheeler, is also facing charges for his alleged role in helping Tavores' flight from justice

"That's my child. I know my child. My child is not a murderer," the suspect's mom told Eyewitness News.

"His mother aided him that night in escaping," said Sean Teare, chief of the vehicular crimes division in the Harris County District Attorney's Office. "She is charged with hindering. She also lied to the sheriff deputies that night. Her boyfriend drove the car that helped him escape. He is being charged with third-degree apprehension."

Teare continued, "She and the boyfriend took him from a location close to the scene to a hotel, where he spent the night. She then went to her home and came into contact with sheriff's deputies immediately when she arrived at her house. She initially told them she didn't even know who Mr. Henderson was."

Tavores Henderson was taken into custody without incident in the 4200 block of Heritage Trail Drive, the sheriff's office said. The 21-year-old faces an upgraded charge of capital murder.

An anonymous tip into Crime Stoppers was key in capturing him. There was a combined reward of up to $20,000 for his arrest.

Here is how authorities captured the fugitive in the murder of Nassau Bay police Sgt. Kaila Sullivan:

Henderson is apparently no stranger to run-ins with the law.

Court records show last Sunday, he allegedly tried to kidnap the mother of his children from a Topgolf parking lot on Houston's west side. The woman was there attending a work event. Records show the two made it a few blocks away, where she told Henderson that police had been called and her mother was coming. That caused Henderson to let her go. That alleged assault is why a warrant for Henderson's arrest was issued.

A police officer hit by a suspect's vehicle in Nassau Bay was about to mark 16 years with the department.

He appears to be proud of his various arrests, recording his own release from Harris County Jail a few months ago, and posting it onto his Instagram page. He has also posted his own mugshots on his page, and featured various parts of his alleged criminal history on his rap videos uploaded on YouTube.

Sgt. Sullivan, who was hit and killed during a traffic stop, was from Friendswood and would have marked her 16th year with the department this month.