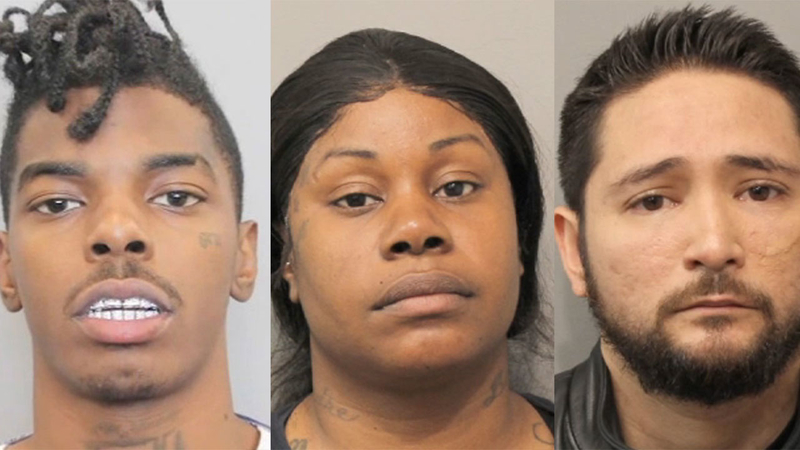 HOUSTON, Texas (KTRK) -- The mother of the man accused of killing a Nassau Bay police sergeant and her boyfriend were taken into custody Monday morning after a judge raised their bonds.

Tiffany Henderson is charged with hindering an investigation, a third degree felony, after she allegedly lied to detectives during the manhunt for her son, Tavores Henderson.

Tiffany Henderson, the mother of the accused Nassau Bay cop killer Tavores Henderson was in court this morning. Her bond was raised to 60k for a previous felony case back in October that she was out on bond for and to $125k for her most recent charges. She was taken into custody.

Her boyfriend Geoffrey Wheeler is facing up to 10 years for his role in lying to investigators. He was taken into custody in a 60k bond.

Later when they returned, Tiffany said she didn't know her son's whereabouts. Authorities initially believed he may have hidden at her house and conducted a search of the location on Wednesday.
Detectives told ABC13 they uncovered surveillance video from a hotel that shows Tiffany and her boyfriend dropping off Tavores at the hotel.

"She and the boyfriend took him from a location close to the scene to a hotel where he spent the night," Sean Teare, Harris County District Attorney's Office Chief of Vehicular Crimes, said. "She then went to her home and came into contact with sheriff's deputies immediately when she arrived at her house. She initially told them she didn't even know who Mr. Henderson was."

Court documents say that when investigators asked why she lied, Tiffany said, "because I am a mom."

Prosecutors say if the couple had not lied to police, there would never have been a manhunt putting the community at risk.

In both cases Monday, the judge increased the bond the prosecution was asking for.

The prosecution mentioned Tiffany's criminal history, saying she was on probation for a felony warrant for assault of an elderly person, punching that person in the face several times. In that separate case, her bond was set at $60,000.

For the current charges against her in helping her son on the night of the sergeant's death, her bond was set at $125,000. She and Wheeler were taken into custody.

Tiffany faces 25 years to life for the felonies, if convicted.

Teare said officials are still investigating, but he wouldn't be surprised if more people were charged in trying to help Tavores.

When asked if anyone else could be charged for helping Tavores Henderson, prosecutor Sean Teare said they are still investigating, but that he wouldn’t be surprised.

Tiffany's bond was initially set at $50,000. She posted bond for that on Saturday morning before being arrested again on Monday.