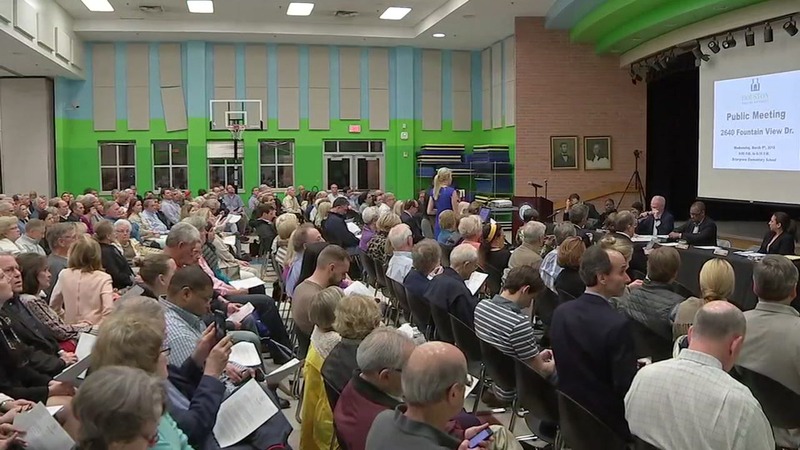 HOUSTON (KTRK) -- Plans for a low-income housing development in the heart of Tanglewood has neighbors uneasy. On Wednesday night, a standing-room-only crowd made their opposition very clear in a meeting with the Houston Housing Authority.

The HHA would tear down the building that currently houses its headquarters at 2640 Fountainview and put up a 233-unit apartment building for low-income families. The main concern cited in the meeting, held inside Briar Grove Elementary School's cafeteria, was overcrowding at the school.

"On day one at Briar Grove, kids come to school and there's no place for them to go," says John Luman. "So literally 200 kids this year had to find some other place to go to school."

John Luman is the chairman of the Stop HHA Project Committee. He and his fiery neighbors also have concerns about transparency, or what they believe was a lack thereof.

The HHA says it put the information out there, but the community just missed it.

"Not a lot of folks pay attention to what we're doing. We've been a resident in this neighborhood as a housing authority for 20 years," says HHA Board of Commissioners chairman Lance Gilliam.

"I have seen low income housing developments," adds Ret. Lt. Col. Richard Caldwell. "I've seen the trash that's around them. I've seen them move two to three families into one apartment because then they can be affordable."

"I want them to see that our community is not trying to push out affordable housing," shares Briar Grove parent Karen Posey. "What we're trying to say is we need to use our tax dollars in the most efficient way."

Chrishelle Palay with the Texas Low Income Housing Information Service says the proposed location is as good as any. She says the people they're trying to keep out of the neighborhood are already here working in a place in which they can't afford to live.

The HHA says this is not a done deal. There's still a process to work through.

Several elected officials who spoke at the meeting assured the crowd that the necessary approvals remaining will not go through.