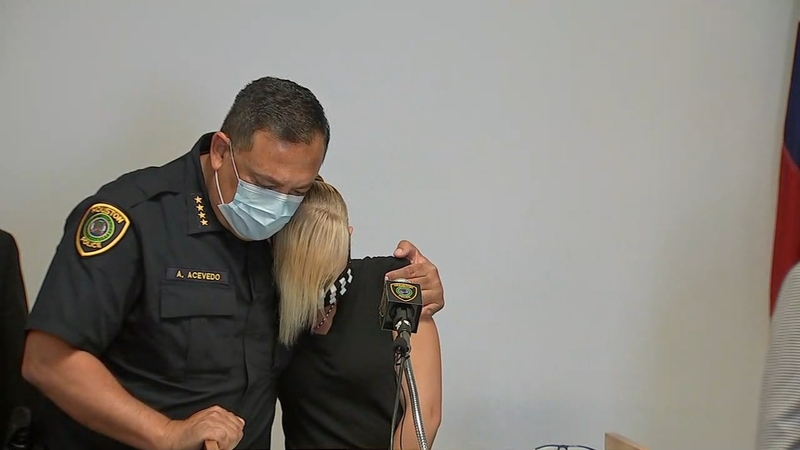 In a five week time span, there were six people killed by Houston police officers.

Numerous times in the past, when asked why body camera footage was not being released, Chief Acevedo said several families asked that it not be. On Saturday, he brought those families together.

Nicolas Chavez was shot to death in the 800 block of Gazin Street on April 21.

His wife, Jessica, was overcome with emotion to the point of not being able to speak when she took to the podium at Saturday's press conference.

Her children had seen the 45 second video clip, captured by a citizen, of their father's death, and it had greatly affected them, said Acevedo. She asked for the video of his death not to be released.

The family of Rosalie Cook also said they did not want the video released of her death.

Cook was stabbed to death by Randy Lewis on May 16 in the parking lot of a southwest Houston Walgreens. HPD said Lewis approached a responding officer with a knife, and he was shot to death.

Chuck, Cook's son, said he did not want the video of his mother lying in a parking lot dying to be on the Internet for her grandchildren to see.

Adrian Medearis, a gospel singer, was shot to death by a Houston police officer during a confrontation on the North Freeway and Esplanade on May 8.

His brother, Audrick, said he has two priorities right now: protecting his family and his brother's legacy. He also asked the body camera video from the deadly shooting not be released.

Moving forward, Mayor Turner said he is putting together a task force to review police reform this month.

He said they will come up with the criteria on what should be released and when. The mayor said the families' wishes will be taken into account.