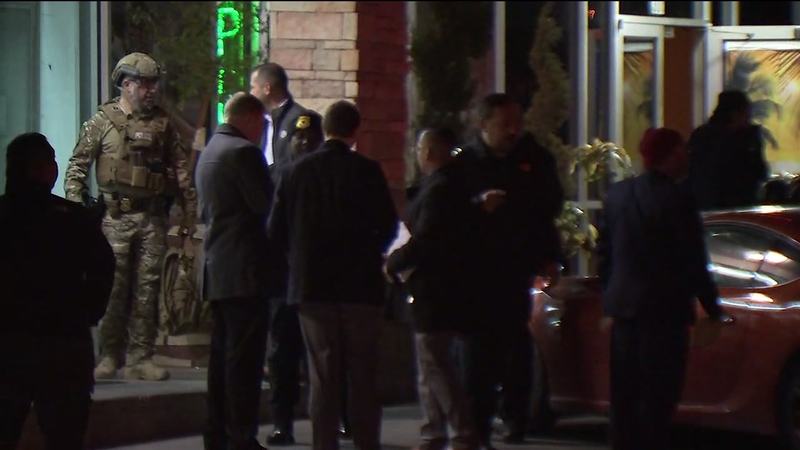 HOUSTON, Texas (KTRK) -- A SWAT standoff that lasted more than four hours in Chinatown came to an end after a suspect who fired shots in the strip mall was found dead in a game room.

Houston Police Chief Art Acevedo said there was an incident Monday with the suspect after he was refused entry at the Saigon Nho Café on Bellaire near Cook Road for having a gun.

Acevedo said there was a verbal altercation later Monday night, which caused the suspect to fire several shots into the strip mall. A bullet grazed one man in the head. Police initially said that man was a worker at a nearby BBQ restaurant, but the café owner tells Eyewitness News he was a customer standing near the café. He's expected to be OK.

Police said the suspect fired a shot in the Saigon Cafe the day after he was refused entry for having a gun.

Witnesses told officers that they saw the suspect run into a game room adjacent to the Saigon Café overnight, where he hid upstairs until police found him.

Acevedo said officers told the suspect to show his hands, but he refused.

"This suspect does not comply with those commands. It was on [the officer's body camera] video and then you hear one gunshot and the officer, believing he was being shot at, discharged several rounds at the suspect," said Houston Police Chief Art Acevedo.

That officer was not hurt.

The suspect was found dead around 5:30 a.m. with a gunshot wound to the head and a pistol in his hand. Acevedo said it appears the suspect may have shot himself.

"Somebody loves that human being and as always, your heart goes out to the family," Acevedo said.

The chief says the suspect was an Asian man in his late 20s or early 30s. His name has not been released.

Meanwhile, four men and two women were arrested at the scene for their alleged involvement in the illegal gaming operation.

Police took 4 men, 2 women into custody, tied to illegal gaming. Chief says there will be another investigation into that. But, right now priority is this SWAT situation. #abc13 pic.twitter.com/vJoPAH3kJG