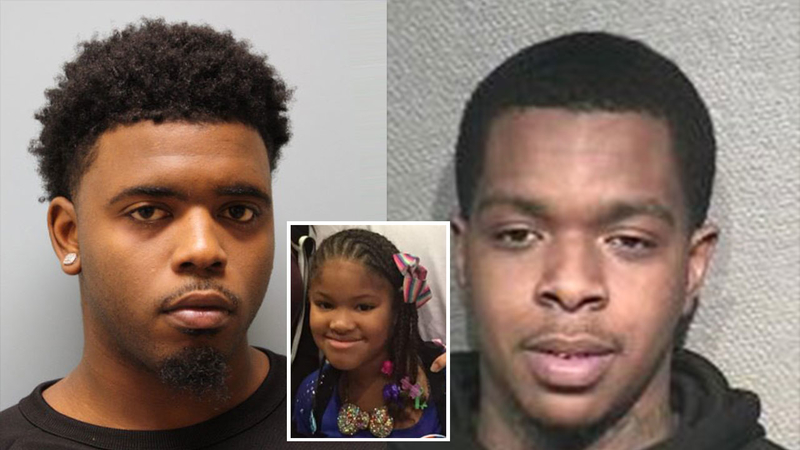 HOUSTON, Texas (KTRK) -- New details in the deadly shooting of 7-year-old Jazmine Barnes revealed the suspects fired at the car she was in by mistake. According to court documents, the suspects believed it was another vehicle.

An investigation tip led authorities to 20-year-old Eric Black Jr. who has been charged with capital murder in the deadly shooting and a second suspect has been taken into custody.

"We got the corroboration we needed."

An investigation revealed evidence that corroborated the tip, authorities say, and Black was taken into custody in east Harris County without incident. He later reportedly admitted to taking part in the shooting.

Black appeared in court just before 5 a.m. Sunday. During court, it was revealed the suspects learned they had fired into the wrong vehicle after watching the news.

Documents also revealed sources stated the suspected vehicle in the deadly shooting was not the red pickup truck, and that Black was driving a rental vehicle of unknown description.

According to a judge, Black returned the vehicle after the shooting and got a new rental - which he was driving at the time of the arrest.

During the investigation, Black said the pistol used in the shooting was at his residence. He signed a consent to search and investigators recovered a nine-millimeter pistol - which is consistent with the caliber of shell casings recovered at the original scene.

After his court appearance, the state asked Black to be held without bail.

New details in the deadly shooting of 7-year-old Jazmine Barnes revealed the suspects fired at the car she was in by mistake.

Sheriff Ed Gonzalez gives an update after two men were arrested in connection with the murder of 7-year-old Jazmine Barnes.

Following Black's arrest, sources told ABC13 Larry Woodruffe, 24, was also arrested as a second suspect in the case. Those sources said Woodruffe is believed to be the shooter.

Woodruffe appeared in court Sunday morning on a drug possession charge, where a judge said he is also a suspect in a capital murder investigation.

During court, investigators say a traffic stop was conducted on Jan. 5 at the 13,600 block of Woodforest Boulevard on a 2007 Pontiac GC, Woodruffe was driving, for an obscured license plate and a defective light.

During a pat down search, officers say they found a plastic bottle containing 124 pills, some which they recognized to be Xanax.

This is not Woodruffe's first encounter with the law, as he has multiple prior convictions.

Jazmine was a second grader who was on winter break from L.E. Monahan Elementary School in Sheldon ISD. "Jaz," as her family called her, dreamed of one day becoming a school teacher.

Jazmine's father, Christopher Cevilla, says the past few days have been so much to handle. News of the arrests gives them time to focus on what happened to their daughter.

"We were happy. It was a sigh of relief that the police did their job and found who they feel is the right suspect," said Cevilla.

Cevilla said he has nothing to say to the suspects arrested in connection to his daughter's death when asked by reporters.

Jazmine's funeral is scheduled for Tuesday. Her family is establishing a scholarship fund in her memory.