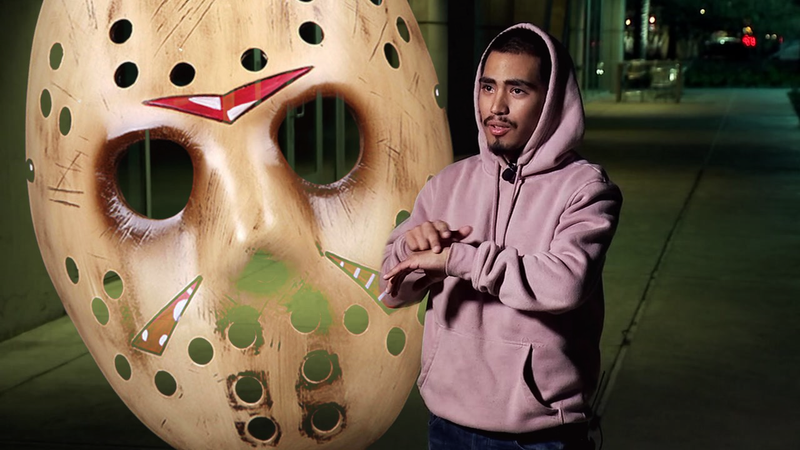 HOUSTON, Texas (KTRK) -- A man who thought he was doing a friend a favor ended up beaten by a man wearing a "Jason" mask.

Nate Castillo, 24, has recovered from a broken kneecap, broken jaw and other injuries after an ambush in August. He says he was hit 20 times with a baseball bat.

Joana Cruz, 20, and Jackson Revelo, 18, have been charged with aggravated robbery with a deadly weapon.

Castillo told Houston police that Cruz, a new friend, set him up to be robbed. He says she asked him for a ride back in August and when he went to pick her up, a man wearing the mask from the "Friday the 13th" movies grabbed her.

At 10-the brutal attack involving a fake robbery, baseball bats and an attacker dressed like “Jason” from “Friday the 13th” that sent this man to the hospital. #abc13 pic.twitter.com/P88KzwPdsa

Castillo took off but soon returned. That's when, he says, Revelo and two other men made him get out of the car and onto his knees. They beat him with baseball bats and stole his car.

When Castillo's vehicle was recovered, the mask was found inside.

"When they hit me with the bat, that's when I knew she set me up, because she was just watching and doing nothing," Castillo told Eyewitness News.

Cruz remains in jail. Revelo is a documented gang member, according to court records. He was out on bond at the time for a previous robbery and now has a warrant out for his arrest.

Castillo, who had his jaw wired shut for 3 weeks, says the ordeal has made him stronger, but also not so trusting.

"I gotta watch my back and not help people out as much," Castillo said.