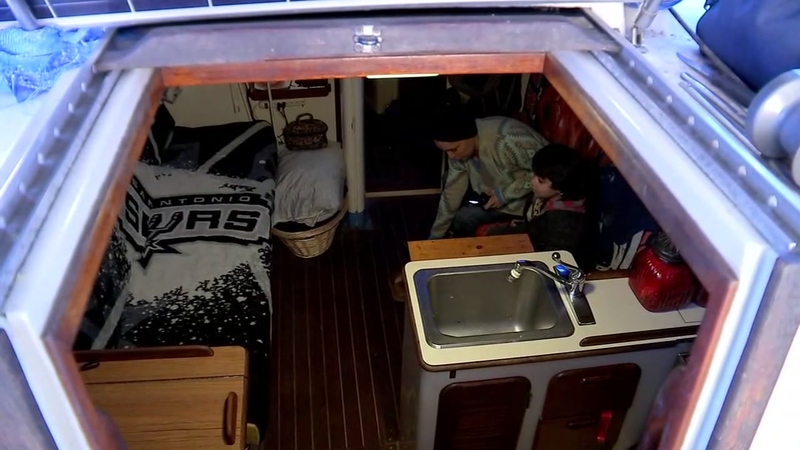 Family fighting to live on boat in Surfside

SURFSIDE BEACH, Texas (KTRK) -- A family that chose to live on a boat in Surfside Beach is fighting a $500 citation, which became the culmination of what they call repeated harassment by police.

Dustin and Marisa Dietrich sold all of their possessions and decided to downsize to a more simple life on board a 34-foot sailboat. The couple and their two children moved in October.

"We downsized for a reason. We got rid of all the stuff we had in the house. We didn't want as much things," said Marisa Dietrich.

The Dietrichs pay rent to the owner of the boat, while also hooking up electricity and using their landlord's residence for restrooms.

The peace of a downsized life was short-lived for the family when neighbors complained to the city. Dustin Dietrich thinks their decision gives off a negative impression.

"It's vanity. They own these big houses. They pay lot of money for the houses and they think that we pull in and we must be poor or homeless or destitute or something," Dustin said. "But we're not. This is a choice."

On Christmas Eve, police issued the citation, saying it is against the law to live on a boat in Surfside Beach.

"My heart started pounding," Dustin recalled. "It's terrible. I had children on the boat. And they're like, 'Y'all have to go.'"

In response, the Dietrichs are fighting the citation and also starting a petition online for support of their lifestyle.

Despite it all, the city maintains that what they're doing is illegal.

"I say they're hung in the middle," opined Surfside Beach police Chief Gary Phillips. "It's our obligation when we get complaints to cite them, and the (boat owner) knows, and I've explained to him in the past that he cannot rent his boat slips for an occupant to live in."