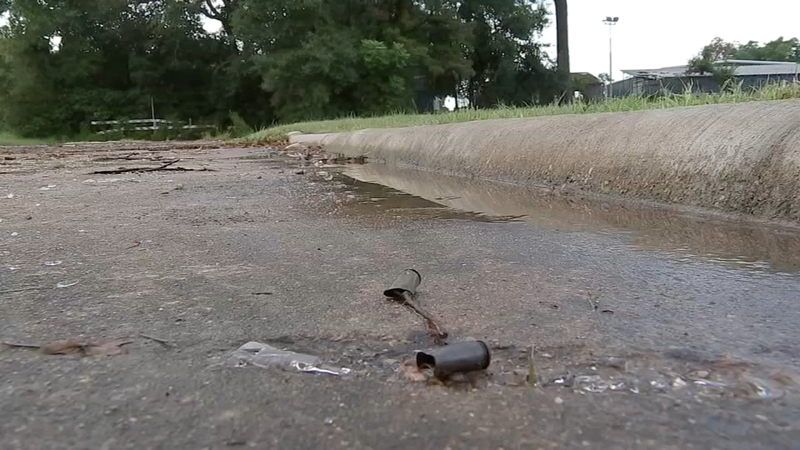 HARRIS COUNTY, Texas (KTRK) -- A 6-year-old boy was hit by a stray bullet in north Harris County overnight, and neighbors say they're tired of the gunfire.

"They're just shooting for fun," said neighbor Sylvia, who only wanted to use her first name. "That's amazing to me, because they're shooting to these houses."

Deputies with the Harris County Sheriff's Office responded to the shooting in the 15400 block of Bammel Field Court. Surveillance video shows the shooting happened at 8:12 p.m. on Monday.

Deputies believe the gunfire could have come from an area behind the residence where the child was shot.

In two videos obtained by ABC13, you can hear the rapid gunshots. In one video, a child's cry could be heard moments after the gunfire. In the second video that pointed to an empty field behind the homes, a black sedan can be seen from the area where the gunfire originated.

The bullet went right into the home and struck the boy while he was on the stairs inside his home, deputies said.

"Actually, I could hear the kid screaming in my camera," said Sylvia. "As a mother, it broke my heart ... because someone who doesn't have respect for human life for no reason. This has to stop."

The 6-year-old child was transported to the hospital in stable condition, according to the sheriff's office. He is expected to survive.

@HCSOTexas units are investigating an incident at the 15400 blk of Bammel Field Ct. It appears unknown person(s) were discharging weapons in the area, a stray bullet entered a dwelling & struck a 6-yr-old male child. Child was taken to hospital and is said to be stable. #HouNews pic.twitter.com/xBQEsOkV2w

"It's unfortunate people think they can just park in that area and shoot a firearm in the direction towards the houses," Deputy Eddie Hazel said. "I think people need to use common sense when using firearms. Never point or shoot it at the direction of a home. There are ranges you can go to. You don't shoot them in neighborhoods."

Investigators said a black car, possibly a newer model Camaro, was spotted behind the houses with tinted windows and a flat spoiler.

A father who lives in the area said this type of violence is pretty typical, and he is tired of it.

"I've been here three years and it's been crazy, like shootings four times a week," Edward Rivera said. "You just don't know what to expect from one day to another. Next thing you know, a lot of people have bullets in their houses."

The city of Houston has seen a spike in crime. Since then, Houstonians are taking measures to prevent themselves from becoming victims.

His daughter also spoke to ABC13 and said she also heard the gunshots. She said she no longer likes to go outside and play.

"I'm terrified to come out here with all the shootings lately, so usually I just go inside and do something," the little girl said. "I heard tonight's shooting. Me and my sister were playing with our little dogs and we just heard random gun shots."