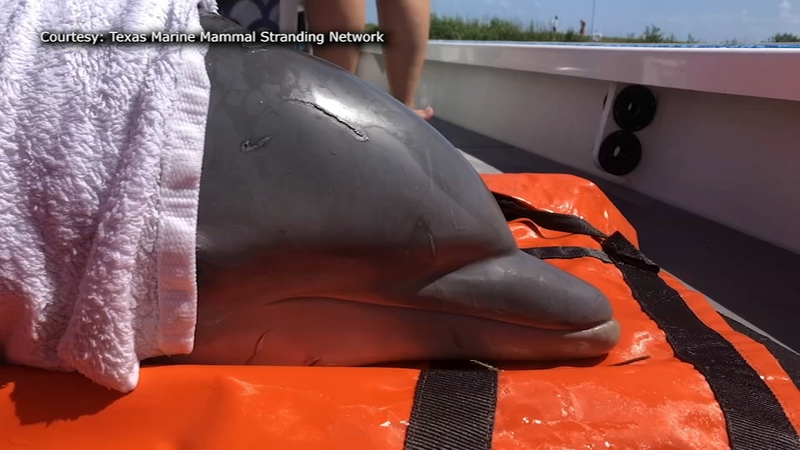 GALVESTON, Texas (KTRK) -- A baby dolphin who was found injured and stranded in Port O'Connor is now getting some tender loving care in Galveston.

The bottlenose dolphin is about six months old.

Gregg called the TMMSN stranding hotline (1-800-9MAMMAL) who got help from Captain Will Granberry of Bay Fishing Port O'Connor Charters in loading the dolphin onto a boat.

From there, the young dolphin, named Russ, was transported across the bay and eventually driven to TMMSN's rehab center in Galveston.

The dolphin is named after the fisherman who found him and provided him first aid care for hours until the stranding network could help him.

Russ has started swimming on his own and receives a special dolphin formula via bottle and tube every few hours.

TMMSN said Russ is underweight because he's been separated from his mother and has been unable to eat for some time.

He also has wounds all over his body, including shark bites.

TMMSN says it is monitoring Russ 24 hours a day.

If you find a stranded dolphin, the non-profit warns that you should not push it back into the water. The mammals typically end up stranded because they are injured or sick and need care.