NWS confirms tornado touched down in Chambers County on Halloween 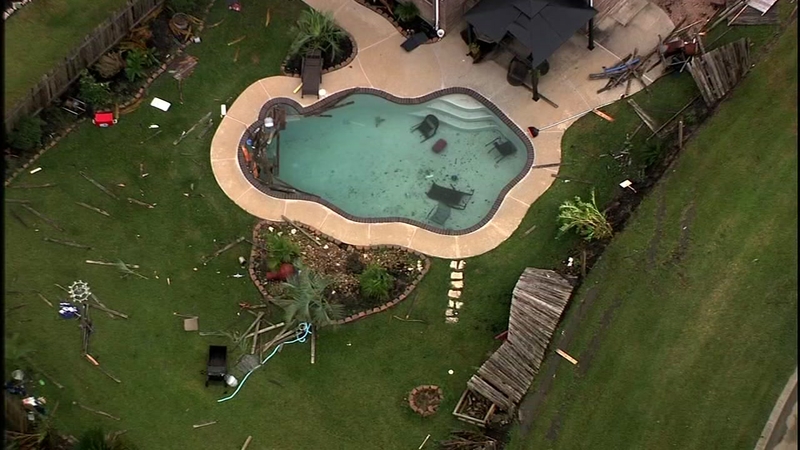 It appears the scariest part about Halloween for Houston and the surrounding communities had nothing to do with monsters or other creepy icons associated with the holiday. It was the weather.

Severe storms blew through multiple areas, leaving behind debris for homeowners to clean up Thursday morning.

The National Weather Service confirmed that a tornado touched down in Chambers County on Wednesday.

In the Lanai neighborhood in Mont Belvieu, debris was scattered in the yard, a fence was blown over and a power pole looked like it was about to snap.

An ABC13 crew noticed cars and school buses driving under it and reported it.

A trailer was also overturned near Lanai Drive. Resident Jesse James Morton said the trailer is a leasing office, but it may have been picked up by the wind and moved about 10 feet because it's not normally that close to the road.

Morton says he's been checking the neighborhood Facebook page to check on everyone. So far, no one has reported being hurt.

"It's crazy. The power is out. It was raining a little bit, but I was not expecting this this morning at all," Morton said.

I’m in The Lanai neighborhood off the East Freeway in Chambers Co. Looks like a tornado may have touched down here. Fences down, trailer overturned, power pole about to snap. Live updates on @abc13houston pic.twitter.com/gpVOUgM1N2

Neighbor Leroy Ballou says he thinks his daughter saw a tornado in the area. His family had been without power since about 10 p.m.

After hearing a train sound Wednesday night, he said his first thought was to get some place safe in the house.

"My daughter sleeps upstairs and she came running down screaming because she saw a green light outside the window, like sort of shined in and we all huddled up in one room," Ballou said. His family wasn't hurt, but some of their patio furniture is spread out around the backyard.

ABC13 reporter Katherine Marchand is in a neighborhood near Mont Belvieu where there is storm damage.

People in Galveston County will also likely spend the day cleaning up.

Video shows tents blown down along The Strand. The island has been getting ready for the Lone Star Rally, which starts Thursday.

The Strand is one of the streets that will be blocked off.

Then in Texas City, heavy winds knocked down a carport, bending large parts of the metal roof.

Storm damage was seen in Galveston on The Strand and in Texas City.

Severe storms and tornado sightings stretched to other parts of southeast Texas, including Eagle Lake, where a viewer captured a tornado spinning over rice fields.

The National Weather Service confirmed a tornado briefly touched down west of Sealy.

The storm created a dangerous situation for a man in Clear Lake as well. He escaped serious injury when a tree tumbled over at an apartment complex while he was outside in the rain.

He was hit by a couple of branches, but was OK.

An apartment resident was recording the storm when a tree nearly hit a man walking by.