Constables find $1 million worth of stolen goods in Katy home 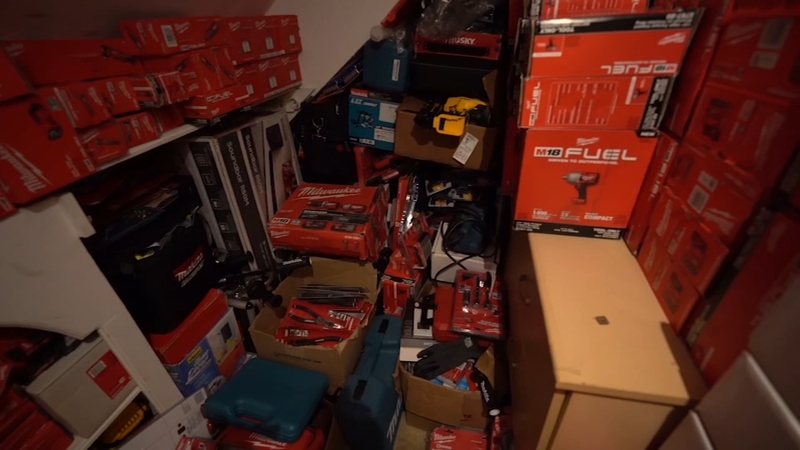 Constables find $1 million worth of stolen goods in Katy home

KATY, Texas (KTRK) -- Investigators discovered more than $1 million worth of stolen merchandise inside a Katy home Wednesday as part of a major theft ring bust.

Officers with the Harris County Precinct 5 Constable's Office and the Texas Department of Public Safety spent hours at the home on Hoveden in the Nottingham neighborhood in Katy.

On Wednesday, they searched the home and found it full of stolen merchandise.

"There appears to be one bedroom used for sleeping. The other four bedrooms, including bathrooms, were stuffed full of merchandise," explained Precinct 5 Constable Ted Heap. "There's even a makeshift elevator system to be able to bring stuff from the bottom so they wouldn't have to walk upstairs."

Heap said the discovery came after a lengthy investigation into items stolen from Home Depot stores in Colorado. The homeowner and another man were taken into custody. Their names have not been released. They face engaging in organized crime charges.

Authorities believe the items were stolen from stores in Colorado and then driven to the house in Katy, where the homeowner would then sell them online for a profit. They say trips were made every other week for years.

"I believe this individual here probably had millions of dollars worth of sales," Heap said.

Close neighbors said they wondered about the stuff they often saw unloaded at the home and then shipped off.

Others were shocked by the criminal activity happening down the street.

"I think it's a big surprise for Nottingham," said neighbor Lauren Pruett.