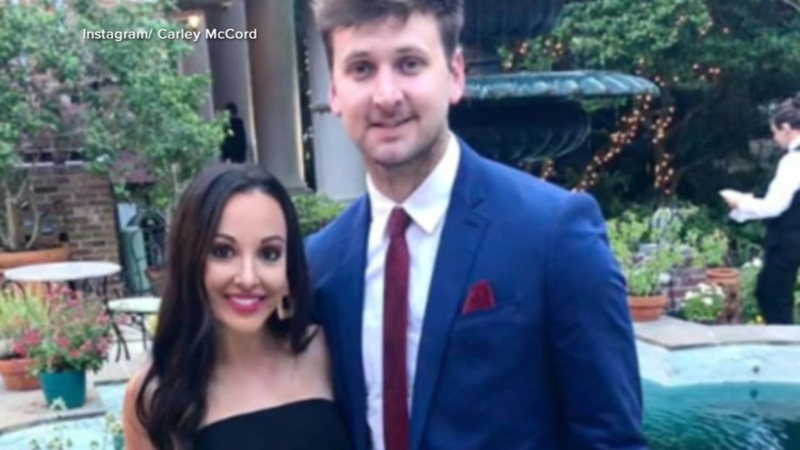 LAFAYETTE, Louisiana (KTRK) -- We're learning more about the sports reporter who was among the five people killed in a plane crash in Lafayette, Louisiana Saturday.

"I love you" was the last text message Carley McCord's husband, Steven Ensminger Jr, says he received from his wife before she took off on the flight that ended her life.

Ensminger told ABC News that he didn't see the text message until it was too late to respond. He also said that he missed a phone call from McCord because he was working.

"It's the first thing I think about when I wake up and the last thing I think about when I finally fall asleep," Ensminger told ABC News. "Every once in a while throughout the day I find myself grabbing my phone and sending a text to her phone replying, 'I love you too'. Now, I don't know if that's crazy of me or not, but I'm praying she gets my message. And I wish there was a way she could let me know she has."

Ensminger said his aunt delivered the news about his wife's death to him.

"My aunt Betty called and she told me I need to sit down right now and listen carefully. And that's when my world fell apart," he said.

Ensminger describes the "love of his life" as a "feisty" young woman who "loved fiercely and was passionate about her job." "She loved her family and she loved me and we loved each other. I could write a book on the things that makes Carley special, but I wish I could tell her instead."

He recalled a time when she taught kids in China English online from 7 to 10 p.m., went to bed, then woke up at 3:30 a.m. to teach again from 4 a.m. to 9 a.m. Then she went to the gym, came home to do laundry, and then booked trips for people as a travel agent. After that, she drove to New Orleans and emceed a Pelicans game. She was home by 11:30 p.m. and woke up at 4 a.m. to teach again.

"She never stopped. And it was that work effort that convinced me that every time we went to bed that if she asked me to rub her back until she fell asleep, I did it," Ensminger said.

McCord was headed to the Peach Bowl in Atlanta with friends to watch LSU play Oklahoma. Ensminger's father is LSU's offensive coordinator.

Reports say the couple had planned to drive to Atlanta together, but Ensminger had to work and couldn't make the trip.

As authorities continue to investigate what caused the plane to crash, Ensminger says he's trying to focus on the good.

"Either way it's done and she can't come back. So the how is irrelevant to me now," he said. "I guess I just have to have faith that God has a plan and that I will get through this and be better for it and I will honor her in whatever I do."