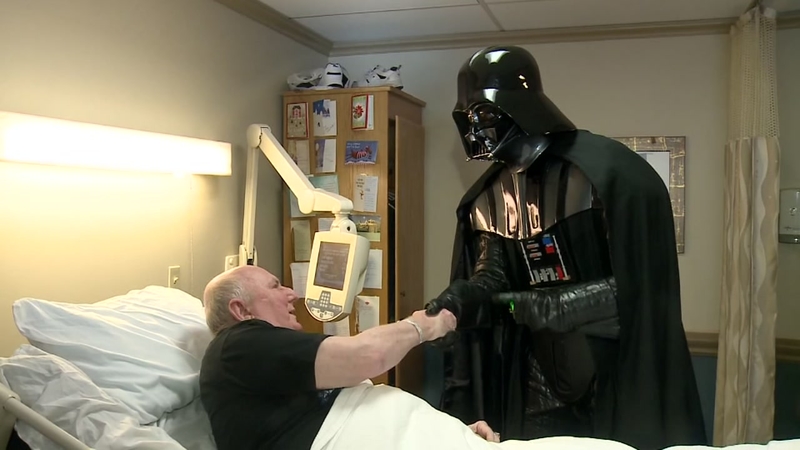 It wasn't your typical Saturday for Villemaire. The 69-year-old received a bedside visit from Darth Vader who had a message for the life-long Star Wars fan.

"Ron Villemaire," said the costumed Vader. "You have been summoned by the Emperor."

His mission was to go to a screening of "Star Wars: The Last Jedi."

"This is awesome," Villemaire said.

He was diagnosed with stage four colon cancer earlier this year.

His daughter, Elizabeth Ngo, previously bought tickets to the movie thinking her father would be well enough to go, but his pain only got worse. He is now receiving care at a facility in Bedford.

Elizabeth put out a call for help, sparking an online hashtag "#RonsLastJedi," in hopes that someone could grant her father's one last wish.

It didn't take long for an answer.

"I never would've believed it would've turned out like this," Ngo told WMUR. "I mean this is incredible."

Ron got an escort by first responders to the theater where he arrived to applause from a cast of characters from a galaxy far, far away.

"Our role here is to make sure he is comfortable, and he is able to enjoy this experience," New Boston Fire Chief Dan Macdonald said.

"You can't put a price on it right? I mean it's something that a need arises, and all these people jump in to make sure it happened," Bedford Fire Chief Scott Hunter said.

O'Neil's Cinemas donated theater time to Villemaire and his entire family so they could enjoy the experience together.

"We're also big Star Wars fans and we could help him," theater owner Kelly O'Neil said. "I think any time you can help someone you should."

And although he's going through a difficult time, Villemaire said he is definitely feeling the force of good thanks to everyone's efforts.

"I hope God will bless each and every one of them just the way I feel blessed right now. He's definitely with me right now," he said. "It's just unbelievable all these people are here, and thank God for Star Wars fans!"