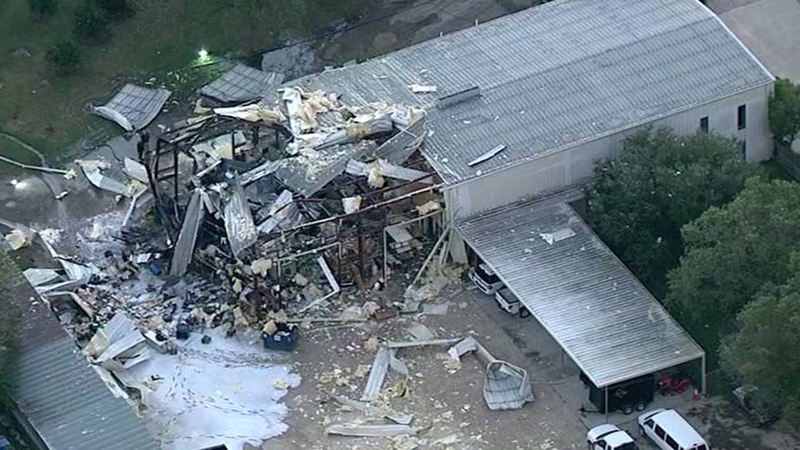 STAFFORD, TX (KTRK) -- Fire investigators say the explosion which rocked a portion of the city of Stafford this morning was caused by a propane leak.

WATCH RAW VIDEO FROM SKYEYE OVER THE SCENE:


Eyewitness News learned that investigators have focused their attention on a propane tank on board a competition barbecue trailer which was parked inside the building on Brand Lane. They say they believe preliminarily that the explosion was sparked by the propane gas which was ignited by electricity powering a refrigerator on board that same trailer.

Despite the damage at Jimerson Underground, no one was hurt. No one was there around 4am when the incident occurred.

"If that had happened during 8 to 5 it would have been a whole different story," owner Alicia Jimerson said. She says 75 people work there.

The explosion rattled and even broke windows at homes nearby along Brand Lane near Main Street.

"The warehouse is secluded from any residential areas. We're fortunate," a Stafford official speaking with Eyewitness News said early this morning.

The group is well known for its fundraising and commitment to community. It's participated in the Houston Livestock Show and Rodeo cook-off for 43 years, raising hundreds of thousands of dollars in scholarships. They've cooked for victims of the Memorial day flooding in Meyerland. Just a few weeks ago they helped celebrate the Marine Corps birthday at the Redneck Country Club in Stafford. They say they won't let something like this stop them from doing what they do to help the community.

"We are going to put all our efforts now into trying to still... we will still be at the cookoff," Trapolino said.

They're hoping insurance will cover most of the cost for replacement of the barbecue trailer. The same goes for Jimerson Underground - they're hoping business won't be affected for too long.
Investigators believe the explosion was accidental.