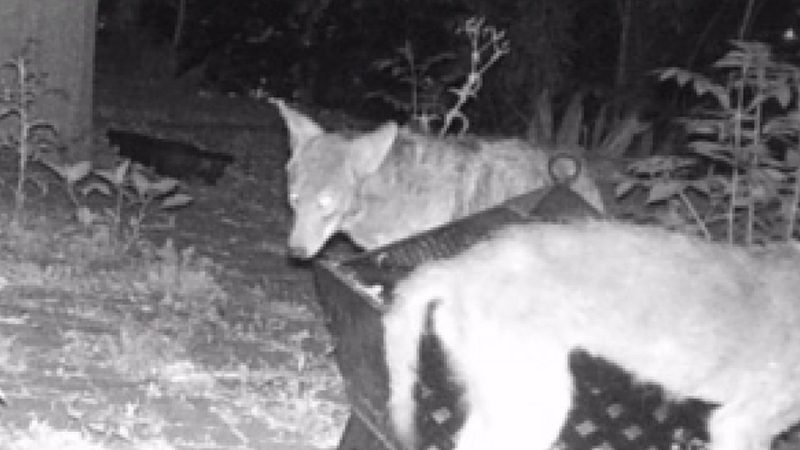 Neighbors want to rid of coyotes after latest attack

SPRING VALLEY, Texas (KTRK) -- A collar and some precious photos are all Dave and Pam Schwab have of their beloved dog, Bobby. Their Cavalier King Charles Spaniel was killed last month by coyotes that came into their backyard from the nearby creek.

"He's just a very, very sweet, mild dog," said Pam, with tears welling up in her eyes. "I would think the coyotes lured him out, because he loved to play with other dogs."

The Schwabs' dog was attacked in broad daylight, part of a growing problem in the Spring Valley and Hilshire Village areas.

Eyewitness News obtained several videos and photos of coyotes in various backyards over the past few months. One doorbell video shows several coyotes dragging away a cat. Another shows three coyotes roaming around a homeowner's backyard.

A couple is heartbroken after their chihuahua was mauled by a pack of coyotes.

"They're aggressive, they're hungry, they're eating everything they can," said Dan Schwab. "We think they should get rid of them."

Residents of both communities have flooded their city halls with complaints about the coyotes.

"The good news is the city of Hilshire Village and Spring Valley already share a police department, so we're used to working together," said Mayor Tom Ramsey, of Spring Valley.

The mayors met Wednesday to talk about the next steps in the process. Already, Spring Valley has posted a link on its website for residents to report coyote encounters. The data is being sent to a contracted wildlife company, which is mapping out all the encounters and incidents. Spring Valley has also called the Texas Department of Wildlife, asking for guidance.

Last week, the Hilshire Village City Council voted and authorized its mayor to take the next step.

"Whatever we do, we'll have to get permits," said Mayor Ramsey. "There's a lot of state regulations relating to wildlife."

Neither mayor would talk about an eradication program, even though some residents have commented on various online forums that they would like to see the coyotes killed.

"They need to do something," said Stephanie Berry, another resident who owns several small dogs.

Coyotes jumped her fence last month, but fortunately, her dogs were inside.

Since then, Berry has installed red lights that come on at night designed to scare off coyotes. She also ordered some wolf urine and spread it around the back of her property. The next step is getting a higher fence built.

"Whatever it takes," she said.