45 dogs and cats rescued from deplorable conditions in Spring Branch 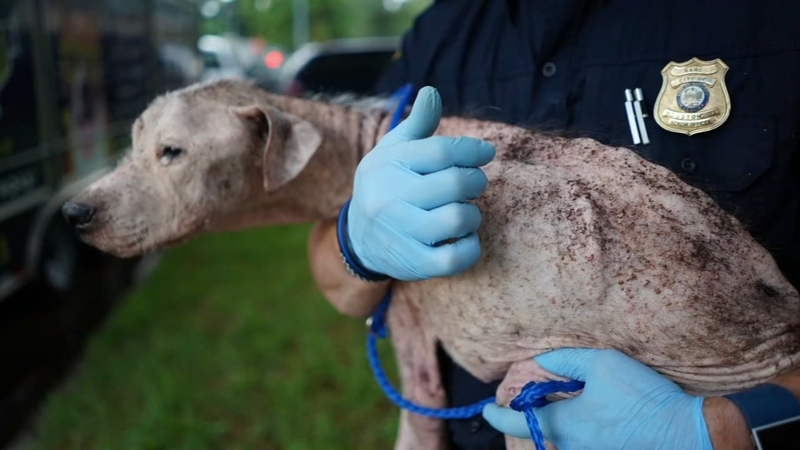 HOUSTON, Texas (KTRK) -- More than 40 dogs and cats were rescued from deplorable conditions in a Spring Branch area home.

A tip to the Harris County Animal Cruelty Task Force led investigators Wednesday to the home in the 8500 block of Kempridge Street.

There were 45 animals living in a two-bedroom, 1,000 sq. ft. home. The filth was unmistakable, but it was the stench that hit investigators first.

This is both heartbreaking and disturbing. These poor animals. @HCCOPct5 @HoustonHumane & @BARCHouston rescued them today from a filthy nw Houston home. 45 animals were in a 2-bedroom house and someone lives here, too. #abc13 pic.twitter.com/nH1q1BRGHQ

"The overwhelming amount of ammonia. It was just terrible," said Sgt. Charles Jantzen with the Harris County Pct. 5 Constable's Office.

With a warrant in hand, officers expected it to be bad, but what they found was even worse, they say. A woman also lives in the home.

"A lot of feces and urine throughout the kennels," explained Jantzen. "Very little food and water. A lot of medical issues with the animals, from hair loss all the way to broken bones. There's a dog with a missing eye, missing limbs and some deformities. Very tragic."

Seven cats and 38 dogs were removed, including eight Great Danes. Neighbors, who tell ABC13 they couldn't spend time outside because of the smell and the flies, were relieved.

"I did not know how bad the situation was back there," said a neighbor, who asked to remain anonymous.

A woman, who came to the door of the home, wouldn't answer questions. Neighbors believe she works at a veterinarian clinic. There was a minivan outside with a "vet tech" sticker.

Wednesday night, the animals, some too weak to stand or showing infection or tumors, are in much bigger and cleaner spaces.

A hearing next week will determine whether the Humane Society gets permanent custody. The district attorney's office will decide if the owner should be criminally charged.