Zack Wheeler has tear in elbow 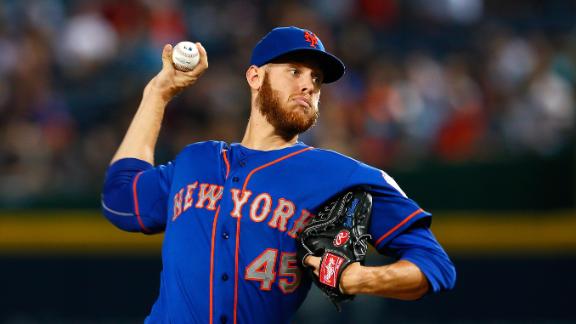 FORT MYERS, Fla. -- New York Mets right-hander Zack Wheeler has been diagnosed with a fully torn ulnar collateral ligament in his pitching elbow and is headed for Tommy John surgery that will cost him the entire season.

Wheeler underwent an MRI on Saturday in Florida that was reviewed by team doctor David Altchek.

"Obviously we wish the best for him," Mets aceMatt Harveysaid Monday. "We're all going to be behind him. Obviously being pretty recentlythrough that process, anything he needs, we're going to always be there and help him out. It's an unfortunate thing. He wants to be playing just as bad as the next guy. It's a tough day for all of us."

Wheeler will travel to New York later Monday or on Tuesday for an in-person consultation with Altchek at the Hospital for Special Surgery, general manager Sandy Alderson said.

The Mets have somewhat of a safety net in terms of the rotation, though. Dillon Gee, who made 22 starts for the club last season, was poised to get bounced to long relief this season Harvey'sreturn from Tommy John surgery.

Manager Terry Collins has indicated throughout camp that Gee would return to the rotation if any injury occurred.

"That's why we have him. He'll be the guy," Collins said Monday, referring to Gee.On a conference call earlier Monday, Alderson said the organization was still digesting the news about Wheeler and would discuss options in a few days.

The Mets still have top prospects Noah Syndergaard and Steven Matz in camp. But a team source told ESPNNewYork.com that the Mets' intention is to use Gee in the rotation rather than deviate from protocol by going with Syndergaard or Matz, as they would reach free agency a year earlier.

Wheeler, 24, went 11-11 with a 3.54 ERA in 32 starts for the Mets last season.He pitched at points with elbow discomfort and was backed off a few late-season bullpen sessions, but did not miss any game action.

Asked if Harvey gave the organization a lift with four scoreless innings against the Red Sox on Monday, he said: "It's a tough day for all of us. The big thing was getting my work done and really focusing on that. If you want to call it picking the team up, I did my best to do that."

Wheeler had two offseason MRIs, according to Alderson. He underwent the first imaging test in November, at which point he was treated with platelet-rich plasma therapy. Wheeler experienced "recurring pain" in January and was sent for a second MRI. The latter MRI was sent to a doctor in California to be reviewed, Alderson said.

Neither MRI revealed any ligament damage, according to the GM. Still, Alderson noted Monday, a compromised-but-not-yet-torn ligament may not appear to be injured on an MRI.

The Mets had indicated in recent days that they were not alarmed by renewed discomfort with Wheeler's elbow because he had managed the discomfort in 2014.

"We had been forewarned by the doctor that his elbow was a concern and it was going to have to be managed over the course of this season," Alderson said. "It wasn't clear that the ligament was involved at that time, but we understood we were going to have to manage his elbow condition over the course of the season. So when he complained of the elbow pain, it wasn't a surprise to us."

Alderson said the fresh MRI was ordered Saturday because "the area of pain had increased in size."

"You're always prepared for bad news," Alderson said. "At the same time, when it actually is confirmed, there's a little bit of surprise. But honestly, I have to say that this kind of result is not totally unexpected."

As for the impact on the Mets, who have endured six straight losing seasons, the reaction was disappointment.

"This is why you have the depth of pitching that you stockpile," outfielder Michael Cuddyer said. "This organization has done that. Losing Zack is a huge blow to us, but hopefully we'll have guys that will be able to step up that we're going to be counting on.

Alderson said that, at the very least, Wheeler won't have to continue managing his elbow pain while pitching.

"It's a blow, but at the same time we knew there would be a lot of uncertainty surrounding Zack and his elbow over the course of the season," he said. "We're obviously not happy he won't be with us. But if there's a silver lining, it's that we now have some certainty and we have a solution for this that he won't have to manage the kind of pain that he had to manage over the course of last season. Doing that over the course of a career is simply unsustainable."

Wheeler To Have Tommy John Surgery
Adam Rubin breaks down what the Mets' plan is now that Zack Wheeler will undergo Tommy John surgery due to a torn ulnar collateral ligament in his right elbow. Wheeler will miss the entire 2015 season.

Harvey Talks Wheeler Surgery
Matt Harvey talks about the Mets' plan after losing pitcher Zack Wheeler for the 2015 season. Wheeler has an elbow tear and will have Tommy John surgery.