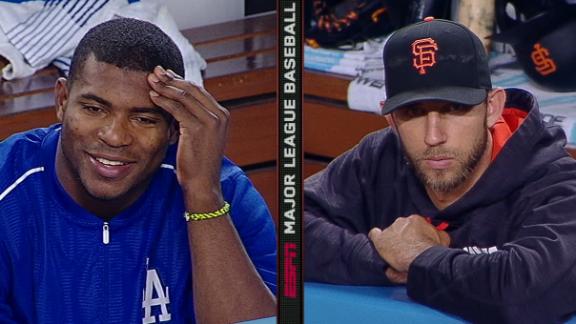 LOS ANGELES -- A victory might have escaped the Dodgers on Tuesday, but their efforts to bury the hatchet with the San Francisco Giants was a rousing success.

A day after the Dodgers' Yasiel Puig and the Giants' Madison Bumgarner feuded on the field, a tongue-in-cheek gift from Puig to Bumgarner yielded laughs from both clubhouses.

Credit Dodgers infielder Charlie Culberson as the go-between for the two camps. The former San Francisco draft pick, who came up in the Giants' system with Bumgarner starting in 2007, had Puig sign a T-shirt bearing the inscription "#DONTLOOKATME" across the front in block letters.

The hashtag was in reference to what Bumgarner yelled at Puig after the seventh inning of Monday night's game. The interaction led to the benches clearing, but the incident went no further.

Puig, who has embraced social media hashtags this year, especially "#PuigYourFriend," wrote several messages for Bumgarner on the shirt, including "I LIKE YOU," "Don't look at me" and his signature with his number, 66.

Culberson had a Dodgers clubhouse attendant deliver the shirt to the Giants' side, and when Bumgarner was not there to receive it, amused Giants players hung it at Bumgarner's locker.

After communicating with San Francisco's Brandon Belt, Culberson said the gift was a hit in the Giants' clubhouse, just as it was in the Dodgers' clubhouse.

Dodgers players had taken pictures of themselves in shirts of their own earlier in the day, with their hands over their eyes.

"It was all in good fun," Culberson said after the Dodgers' 2-0 loss to the Giants on Tuesday. "There was no animosity about it."

Bumgarner and Culberson were both first-round picks of the Giants in 2007, with Bumgarner going 10th overall and Culberson a sandwich pick at 51st overall. They have remained friends throughout their baseball careers. Culberson said he assured Bumgarner that Puig does have a good heart, while telling Puig that Bumgarner really would appreciate the gesture of a signed shirt.

Bumgarner addressed the Puig rift with San Francisco reporters before Tuesday's game and said he had no issue with how the Dodgers handled things on Tuesday.

"That don't make a difference to me, really," Bumgarner told reporters after hearing about the shirt but before receiving it. "If it were turned around, I'm sure we'd do the same."

Bumgarner had left the clubhouse immediately after Tuesday's game, but his gift from Puig still was hanging in his locker.

Information from ESPN's Marly Rivera was used in this report.

Puig puts cherry on top of scuffle with Bumgarner
Jon Sciambi and Doug Glanville recap the scuffle between Yasiel Puig and Madison Bumgarner after Puig tweeted a photo of himself and two other Dodgers players wearing #DontLookAtMe shirts.

Bumgarner and Puig separated on the field
After Yasiel Puig gets out on a soft grounder, he has words with Madison Bumgarner, and the two need to be separated, which causes the benches to clear.