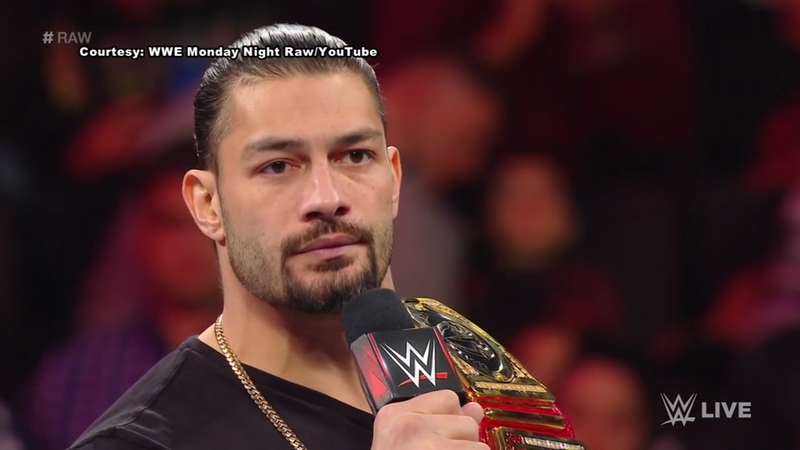 PROVIDENCE, Rhode Island -- WWE wrestler Roman Reigns says he will step away from the ring because he has leukemia.

The 33-year-old Reigns, whose real name is Joe Anoa'i, made the announcement Monday night to open the episode of "Raw."

He was originally diagnosed in 2008 at age 22, though he quickly went into remission. He's been fighting the disease since.

Anoa'i, who played football at Georgia Tech, has appeared in the last four main events at WrestleMania. The WWE's universal champion said during the announcement that he plans on returning to the ring when he gets healthy.

"Reigns is taking his battle with leukemia public in an effort to raise awareness and funds for research in order to advance cures for the disease," WWE said in a statement.

MESSAGES FROM FANS AND FELLOW WRESTLERS FOR ROMAN REIGNS

Thank you for everything @WWERomanReigns. You are truly an inspiration to all of us. Can’t wait to have you back! https://t.co/l4SSbVhG4r

This is the picture I had on my 11th birthday cake 😭 wishing @WWERomanReigns a speedy recovery 🌹 pic.twitter.com/wTLdnU157W

Friend @WWERomanReigns , you have my prayers and your family is your greatest support!! This will pass and you will come back stronger than before. Your health is what matters!! Take care of you! pic.twitter.com/2ql3aasJyq

Get well soon...and come back in the ring as sooon as possible....💖
We all pray for you....
Love from #india🇮🇳💖💖💖💖@WWERomanReigns #ThankYouRoman pic.twitter.com/ucGiFuLXkQ

Thank You @WWERomanReigns for everything wishing for ur fast Recovery 💕💕 Get well soon Champ 💕💕 pic.twitter.com/5smS8i947S

Get well soon @WWERomanReigns
With prayers
He will back soon pic.twitter.com/GOZxphWBIU