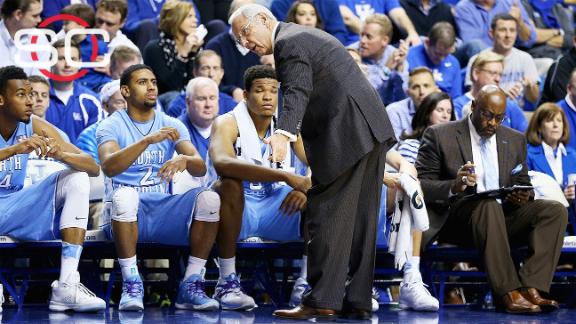 CHAPEL HILL, N.C. -- The notice of allegations is just the beginning of the NCAA's investigation into North Carolina's academic scandal, but Roy Williams said reading the report did provide him at least some temporary personal relief.

The school is accused of five major violations, including lack of institutional control, but the basketball coach's name appears just once in the 59-page document, and he is not included in any part of the actual allegations.

"I've said I felt very comfortable for a very long time because we've been investigated by 73 people and all 12 disciples of the Lord, it feels like, and every one of them has said Roy Williams didn't know anything about this; he didn't do anything,'' Williams said Tuesday during an interview with ESPN.com and Yahoo! Sports. "So there was a sense of relief, but it's what I expected. It wasn't a big relief, because it's what I thought was going to be there.

"But how can you say it's a relief when there are five allegations against your university, very serious things? How can it be a lot of relief?''

The university, it would seem, also feels certain that Williams will not be personally punished. Just last week, North Carolina announced it had extended the coach's contract through the 2019-20 season, a decision viewed by many as vindication for the coach.

"I think it might be that way to the public, but it's not to me,'' Williams said. "My friends have really taken a lot of shots, and in some ways, it's better for them than it is for me because they feel better about it. It really didn't mean that much to me, because I have felt doggone good for a long time. But it's been hard for my family and friends because it's almost a personal attack in some ways. That part has been pretty hard.''

Williams reiterated what he has long contended, that he had no knowledge that his athletes were taking paper classes. Even more, he repeated that when he took over at Carolina and noticed the preponderance of athletes clustered in the major and taking independent study courses that he spoke with his staff about changing it.

The NCAA report, in fact, notes his concerns.

Five members of the 2005 national championship team were listed as African and Afro-American studies majors, taking classes that have since been revealed to be fraudulent.

Some have speculated that could mean the championship will be vacated, but Williams argued that despite the paper classes, his players were, in fact, eligible.

"Even if you give a guy four Fs in that spring semester, he's still eligible,'' he said. "We didn't have ineligible players. They took courses that the university offered.''

Since the NCAA wheels of justice move slowly, a final resolution won't come for months. North Carolina eventually will appear before the committee on infractions and then have to await the committee's penalty, a process that could span the entirety of the college basketball season.

The Tar Heels are expected to be a top-5 team this coming season, with perhaps their best chance at a Final Four since the 2009 team won the title.

But Williams said he does not expect the investigation to be a black cloud hanging over his team.

"No, because it's been so bad already. It can't be any worse than it is,'' he said. "Every step we take is a move toward completion. That's the best way to look at it.''