Will Harris leaving Astros for Washington on 3-year deal 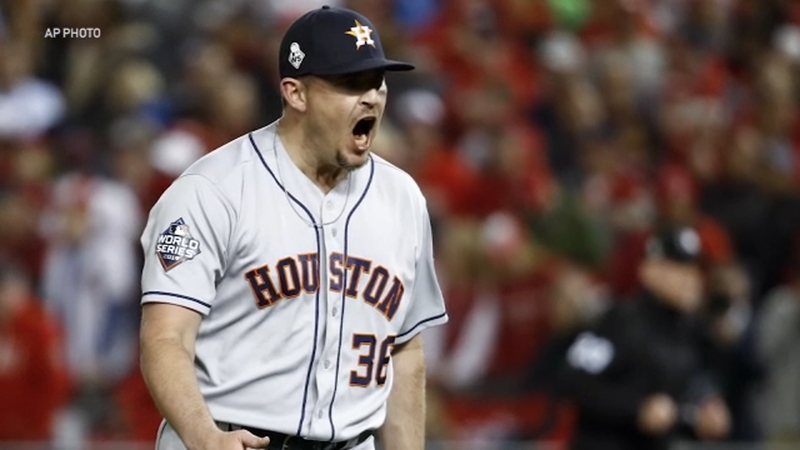 Former Houston Astros reliever Will Harris is heading to the team that beat him in last season's World Series.

Harris confirmed Thursday that he has agreed to join the Washington Nationals, with the team announcing Friday that it is a three-year deal. USA Today reported the deal is worth $24 million.

Harris should jump into an eighth-inning role and could get save opportunities too, according to ESPN's Jeff Passan.

Harris, 35, was one of manager AJ Hinch's go-to guys out of the bullpen for Houston last season, but he'll inevitably be remembered for allowing the go-ahead home run to Howie Kendrick in Game 7 of the World Series against the Nationals.

"Will it be awkward for a second or two? More than likely, but that stuff fades and it's about playing baseball," Harris told MLB.com when asked what it will be like to see the Nats receive their World Series rings. "I've done my homework, and the guys they have that I know who have played there and been there, everybody has told me I'm going to love it."

Harris said he lived "every reliever's nightmare" after allowing the seventh-inning home run to Kendrick. He also gave up a two-run shot to Anthony Rendon in the seventh inning of Game 6 that gave the Nationals a 5-2 lead.

Harris had a 1.50 ERA and 62 strikeouts in 60 innings for the Astros during the regular season. He also had 26 holds and four saves as the Astros led the majors with 107 wins. He made 12 appearances during the postseason, posting an 0.93 ERA while striking out 11 in 9 innings.

"I felt like the whole process was kind of trending toward the Nationals maybe from the beginning," Harris told MLB.com. "They seemed to be the most bullish on me and made me a priority from the beginning...They were on my really, really short list of places I wanted to go, and to have that kind of matchup, I think, was great for everybody."

On Aug. 3, Harris was one of four Astros pitchers to participate in the 14th combined no-hitter in MLB history when they blanked the Seattle Mariners 9-0.

Harris, who broke into the majors with the Colorado Rockies in 2012 and spent two seasons with the Arizona Diamondbacks, joined the Astros in 2015. One season later, he had a career-high 12 saves and made his only All-Star appearance. In 2017, he won his first World Series title.