Which player had the best sneakers in the NBA during Week 12? 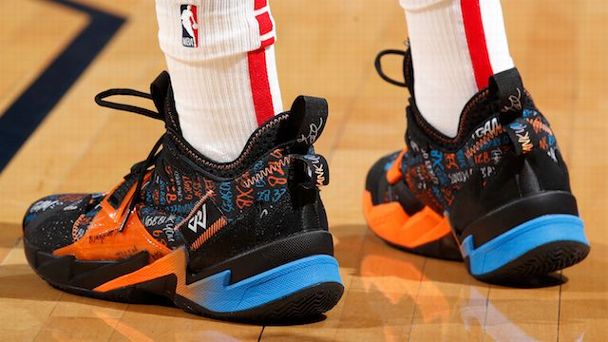 Ever sinceRussell Westbrook's sudden summertime trade away from the only franchise he'd played for came to fruition, the former Oklahoma City Thunder star knew he'd look to highlight his appreciation for the city during his eventual return.

Just before the Houston Rockets were set to face off against the recently retooled Thunder roster, the visiting Westbrook took the floor with his typical pregame Chesapeake Energy Arena routine still intact: handshakes with each and every operations worker along the scorer's table and a clapping sprint to the corner of the baseline to rile up the OKC crowd.

"I felt like I was home," Westbrook said after the game.

He arrived at the game wearing a shirt declaring "Zero Regrets" and "Thank You Oklahoma!" On his feet was a new pair of his signature Jordan WhyNot Zer0.3 sneakers, in the orange and blue hues he'd known for more than a decade. Layered all throughout the upper of the shoe was a collection of his stats with the Thunder during his 11 seasons, along with a simple "Thank You!" message across the heel of each shoe.

"I didn't get this feeling like it was weird. It just felt like I was playing, back at Chesapeake," he said. "Like a normal game for me, honestly."

Just before agreeing with the Thunder on a long-term extension in the fall of 2017, Westbrook had signed a decade-long extension with Jordan Brand, building on the momentum of his MVP season earlier that spring. All throughout his return, fans showered him yet again with "MVP" chants.

Throughout the nostalgic night, as fans donned familiar No. 0 jerseys and the arena aired its first tribute video, players looked to celebrate Westbrook in their own way. During his pregame warm-up, Rockets power forwardPJ Tucker wore one of the first player-exclusive sneakers that Jordan Brand made for Westbrook after signing him in 2012. It was a move the Houston point guard wasn't expecting.

Styled in black, royal, orange and yellow, the Jordan SuperFly 1 PE took things back to the beginning of Westbrook's relationship with Jordan Brand, a partnership that has evolved to include three signature sneakers and is expected to extend throughout his career.

Once he took the floor for tipoff, Tucker had switched into yet another former Thunder star's signature kicks in a move that surprised even the shoe's original designer, Leo Chang. With handwritten coding still on the midsole of the Nike KD IV, Tucker's pair was a "weartest sample" from 2011, a development pair made months before the shoe's eventual release without any identifying player logos.

"I'm just puzzled by the colorway," Chang said with a laugh. "We don't normally sample weartest shoes in anything other than black."

Typically, Nike will make around a dozen pairs of each stage of a weartest shoe in size 13, 14 or 15, with high-level players and employees testing them in closed-door, top-secret pickup games and drills at the Nike headquarters.

The pairs are played in for weeks at a time, analyzed by testing coordinators after and then often shredded and recycled by the brand. The feedback from players is incorporated into the next round of design updates to improve the sneakers if needed. Tucker's tracking down a brand-new pair had the people at Nike who originally created the shoes scratching their heads.

"I love when they are stumped!" Tucker said with a laugh.

Out East, another surprise fourth signature shoe "puzzled" sneakerheads, as Toronto Raptors small forwardStanley Johnson was spotted in a new white, yellow and purple colorway of Kobe Bryant's beloved Nike Kobe 4 Protro. While the colors were classic Lakers tones, a No. 0 along the collar threw some people off.

They were actually originally made for current Los Angeles Lakers power forward Kyle Kuzma, who left the brand in October and signed with Puma. A six-pair set of player-exclusive colorways originally made for "Kuz" was instead recently re-routed to Johnson, who wears the same size.

"It was tough. It was tough from the simple fact of how much I love Kobe," Kuzma said of switching brands. "One, that's my favorite shoe of all time -- Kobe's shoes."

For the current Laker, the decision became more about creating his own path than following in the literal footsteps of Bryant.

"It was tough, but at the end of the day, I have dreams and goals, and I imagine myself being at that type of level in this business," he said. "Making the business decision that I did, hopefully it will pay off."

Dallas Mavericks point guardLuka Doncic debuted the low-top version of the new Air Jordan 34, which features a leather toe cap and neon green accents atop a clean white base. It was the first of many expected headlining moments for Doncic, as he begins the first few weeks of his new five-year shoe deal with Jordan Brand.

Last but not least, LeBron James unveiled a player-exclusive edition of his LeBron 15 model from two seasons ago that caught attention. Styled similarly to Kanye West's iconic Air Yeezy 1 sneaker from 2009, the inspired-by look was complete with tan and pink accents and a glow-in-the-dark outsole.

Check out each of the best sneakers worn around the league this week, and vote for your favorite pair in our poll below. For real-time updates on sneaker culture and NBA kicks, follow @SneakerCenter on Instagram. 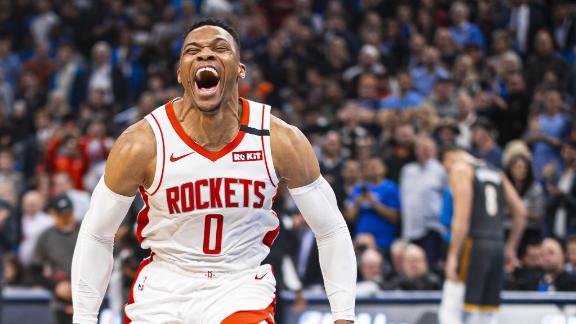