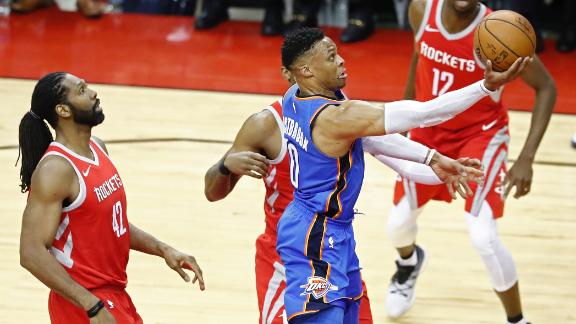 HOUSTON -- James Harden sat on the bench, waiting for his time to check back in and stick a knife into the Oklahoma City Thunder's playoff hopes. With 9:14 left, he got off the bench and jogged his way to check back in right as Alex Abrines finished an and-1 to put the Thunder up four. The Houston Rockets called timeout, and Harden was back in. First possession, a vicious, trademark, step-back 3 over Paul George.

The feeling in the arena was tangible, the kind of feeling that has defined this Rockets season and effectively signed, sealed and delivered the MVP for Harden.Here comes Harden, and there go the Thunder again.

Without Andre Roberson, who is a known Harden-stopper (or as much of one as can exist on this planet), George has taken the primary assignment but went to the bench shortly after Harden's 3 for a quick rest. Russell Westbrook took over the assignment, likely to just spell George until he could return. But Westbrook, who infuriates some with his tantalizing but very inconsistent defensive ability, cranked it up. And when George checked back in after about a minute, Westbrook told him not to switch back. The reigning MVP was taking the expected MVP.

"When the game is on the line, I knew what needed to be done," Westbrook said. "I told Paul and Corey [Brewer] to take somebody else. I got him."

He fought over every screen, jumped passing lanes and frustrated Harden. It sparked a 9-0 run for the Thunder to go up eight midway through the fourth, which included a Westbrook 3, a Westbrook layup and a Westbrook steal and pass to George for two free throws.

Their backs against the playoff wall on the road against the NBA's best team, Westbrook answered the call, as he often has found a way to do for the franchise the past two years. It wasn't a pretty line -- 24 points on 10-of-28 shooting, 7 rebounds and 10 assists -- but it was everything the Thunder needed to pull out a 108-102 win.

"Just better not lose," George said of the Thunder's mindset. "That's what it comes down to. We better not lose. We control our destiny at this point, but we've got to have the mindset that we need these wins. We've got to come out and play our game, and that's always been good enough for us."

The Thunder's season has been defined by confounding moments, strange losses and resilient bounce-backs. They aren't the super-team they were billed to potentially be, or they themselves thought they were, but they do have star power and the ability to flash something special in a 48-minute window.They are now 6-3 against the top three teams in the NBA (Rockets,Golden State Warriors and Toronto Raptors), the best mark of anyone against those teams.

"We came together for that reason," Carmelo Anthony said. "Thinking about the bigger picture. We had some bumps and bruises along the way, but we know what we have to do, what to expect, the level of focus that we have to have closing the regular season out going into the postseason. And tonight, we showed that. Our level of focus tonight was incredible. The past two or three days, even in practice, we had incredible days, and when you have days like that, it trickles down to the actual games."

The Rockets are one of the most dangerous teams in the league when it comes to getting to the free throw line. But in a rare event, they were shut out from getting to the line in the fourth quarter by the Thunder. Meanwhile, OKC outscored the Rockets by 13 points from the line in what was ultimately a six-point win.

"They did a good job," Harden said. "We just missed shots. Nothing changes for us."

The way they played the Rockets, a team already positioned and coasting into the playoffs, mind you, was what the Thunder have stood in the mirror and repeated all season long: It's there, and they can be something, they just have to do it. They've told themselves they're built for the postseason, and at least on one end of things, it was exactly that. The Thunder had to have this game, and with the win, they have set up a scenario in which they punch a ticket to postseason with one more win, either over the Miami Heat or at home against the Memphis Grizzlieson the last day of the season.

What has plagued OKC in the past few weeks has been a perplexing shooting slump, namely for George who traditionally hits some peaks and valleys throughout the season. But after questioning his mechanics and saying his shot felt "funny," George showed up to the Toyota Center on Friday night after the Thunder arrived in Houston, with one of the equipment managers, Wilson Taylor, arranging for him to be let in. A security guard opened up the building for George, and all alone on the adjoining practice court at the arena around 8:30 p.m., George spent an hour or so by himself in the gym just shooting.

It seemed to pay off, at least momentarily, as George drilled a step-back 3 with his first shot Saturday. Maybe some of the karma of the hard work mixed in, too, with George being blessed with a banked-in 3 shortly after. He finished with 24 points on not-great, 6-of-17 shooting, including 3-of-7 from 3, but he dropped a critical, crossover pull-up early in the fourth and knocked down 9 of 10 from the free throw line, featuring some to ice it late.

Then there was Carmelo Anthony, who has become a target for many of the Thunder's struggles and finished with a solid 22 on 7-of-14 shooting. But that included missing his final six shots and making up for it by knocking down a couple of critical free throws. It was all kind of metaphorical for the Thunder's big three -- not pretty, not impressive, but just enough.They combined for 70 of the Thunder's 108 points but on 23-of-59 shooting. But it wasn't about that. It was about holding Houston to 19 points in the fourth quarter.

"When we have a complete a game where everybody feels like they're a part of the game," Anthony said. "We have results like we did tonight."

It felt a lot like survival for the Thunder, but that's what it's about for them. They've gone from dreaming of overpowering the West with talent to just finding a way in. They walked into Houston loose and energetic, dancing pregame and joking around. They just have to push away the idea they're pressing, but as the clock drained out and a 10-point lead slipped to seven, then five, you could sense the Thunder praying for it to just run out. They found a way, and at this point, that's all they can do.