Welcome to the best team in baseball: Greinke rocked, but Astros roll 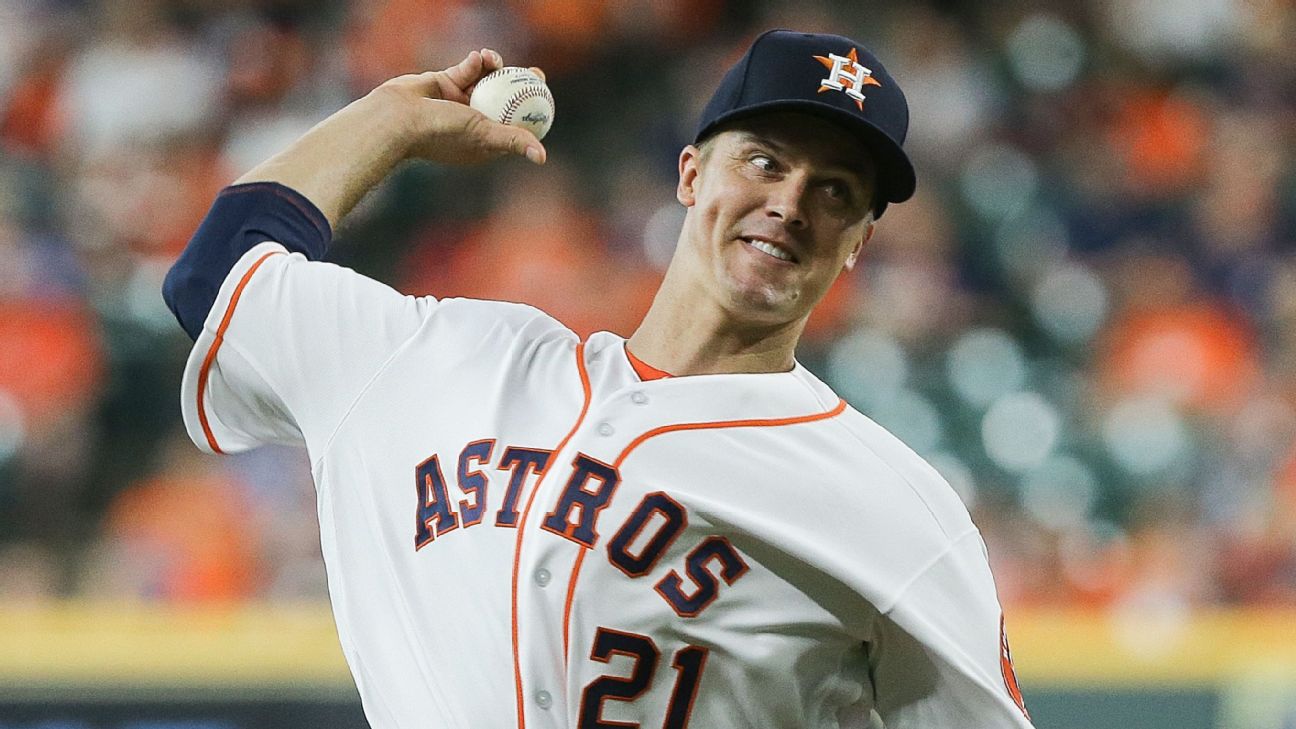 The Houston Astros' scariest new weapon delivered some damage on Tuesday. Oh, and Zack Greinke pitched too. Some observations on Houston's 11-6 win over the Colorado Rockies and the debut of its third ace after he came over in that last-second deadline deal that stunned the baseball world ...

1. As Greinke warmed up, the Astros' television crew talked about how Greinke said he was excited to join such a talented team and that he was eager to learn from his fellow pitchers and everything the Astros analytics staff brings to the table. Manager A.J. Hinch said he had a long conversation with Greinke during which the pitcher "asked a ton of questions."

Of course, Greinke is already a future Hall of Famer and it's more likely his teammates will learn something from him than vice versa, but the curious thing on everyone's mind: Can the Astros actually make Greinke better, like they seemingly can do with every pitcher they bring in? Just the other day, Aaron Sanchez made his season debut for Houston, throwing a higher percentage of curveballs than he ever had before and tossing six no-hit innings. Is it really that simple?

2. Greinke took the mound to a nice ovation, although a late-arriving crowd at Minute Maid Park meant a fair number of empty seats at the start of the game. Final attendance: 43,243. That's about 4,000 more than they drew in the previous Tuesday home game.

Seeing him in an Astros uniform just reinforces that they are now the World Series favorite. Greinke is already having one of his best seasons, entering the game at 10-4 with a 2.90 ERA, 135 strikeouts in 146 innings and the best strikeout-to-walk ratio of his career. His 154 ERA+ is the third best of his career, behind only his 2009 Cy Young season with the Royals and his almost-Cy Young season with the Dodgers in 2015, when he posted a 1.66 ERA.

3. Greinke, of course, is a different pitcher than Justin Verlander, Gerrit Cole, Ryan Pressly or Sanchez, all guys able to crank it up on the radar gun whom the Astros have acquired since 2017. Greinke used to be that guy, but now averages 90 mph with his fastball. He started Charlie Blackmon out with an 87 mph fastball on the corner and his second pitch was that big looping 69 mph curveball that Blackmon fouled off. He then painted the outside corner with a 90 mph four-seamer that sent Blackmon walking back to the bench. I love Greinke.

4. Indeed, for all the desire of pitchers to light up the radar gun and the emphasis on spin rate and other analytical tools, everyone can learn the art of pitching from a master like Greinke: moving the ball around, changing speeds, throwing X when the batter expects Y. Just look at the two fastballs to Blackmon, taking a little bit off the first one and then adding 3 mph on the second one. You don't have to blow the ball past hitters to strike them out.

5. The Astros strike first in the second inning when Yordan Alvarez launches a long two-run home run to right field off German Marquez:

Dear lord, how good is this kid? He's hitting .338/.418/.701 with 14 home runs and 14 doubles in 42 games. He takes a big hack, but his strikeout rate is hardly excessive -- 24.3%, about the MLB average. He has done a pretty good job of controlling the strike zone, although there's some room for improvement there. Which is a scary thought for pitchers.

I get it. It's just 177 plate appearances. Maybe it's a hot streak. But he's so strong and makes so much hard contact while hitting the ball in the air, you have to believe he's going to be one of the game's premier power hitters the next decade. What a talent.

OK, I'm not surprised Alvarez is winning the poll given the start to his career, but I'm surprised it's by such a large margin. But Astros Twitter > Blue Jays Twitter. Anyway, the point: It's not inconceivable Alvarez will be the better hitter. Now, Guerrero is two years younger and that's a big deal. Guerrero, at least for now, is a third baseman, and even if he's not a very good one, that helps his value compared to the DH-only Alvarez. I'd still take Guerrero over the long haul and it's worth noting he has been tearing it up since the All-Star break, but this could be one of those fun debates, such as Juan Soto versus Ronald Acuna Jr.

6. The Rockies got to Greinke with two runs in the fourth, stringing together an infield single, a walk, a wild pitch and a 76.5 mph double. In the sixth, Raimel Tapia tied the score with a three-run homer off one of those slow curves -- 371 feet into the first row in right-center. Greinke ended up getting the win when the Astros scored twice in the bottom of the inning. Still, it was not his best line of the season: 6 IP, 7 H, 5 R, 2 BB, 2 SO, 1 HR.

After the game, Greinke said he had "really, really bad fastball command. Besides that most things were all right." But here's the money quote:

That's a reference to the four home runs the Astros hit, including two from Yuli Gurriel. Greinke also said all the big innings were boring. For a guy who loves to hit, he's going to miss that part of the game. Hinch may have to pinch hit Greinke from time to time just to keep him happy.

7. Check out this fun read from Zach Buchanan of The Athletic on why Greinke's former Diamondbacks teammates will miss him. (And presumably why his Astros teammates will learn to love him ... even when he tells them they threw an awful pitch.)

8. So, did Greinke change anything in his pitch selection? He threw his changeup a little more often, but I wouldn't read anything into that off one game:

He threw only two two-seamers out of his 99 pitches, which sounds like a Houston approach, but he doesn't throw many anyway (average of 5.8 per game with Arizona).

All in all, it was not the best we'll see from Greinke as an Astro. After all, he had seven scoreless starts with Arizona and four more during which he allowed one run. I don't think he's the kind of pitcher the Astros will necessarily make better -- but they don't have to. He's already one of the best in the game and adds a different dimension behind Verlander and Cole and lefty Wade Miley. The Rockies got him for five runs on this night, but I don't think Astros fans will agree with Greinke's assessment: It was hardly boring. 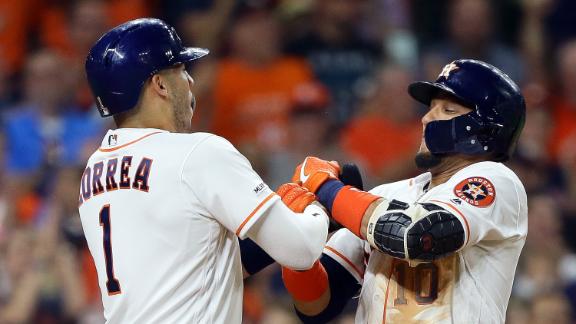 Astros rock the Rockies behind Gurriel's 2 HRs
Yuli Gurriel goes yard twice, while Carlos Correa and Yordan Alvarez club home runs of their own in the Astros' 11-6 victory over the Rockies. 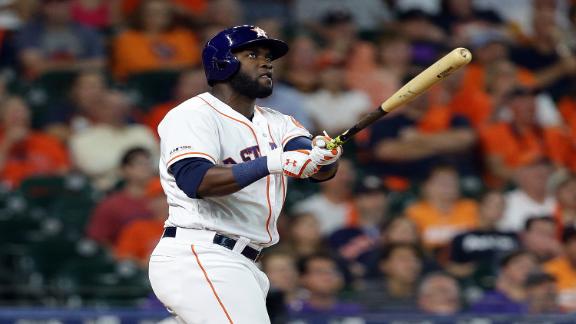 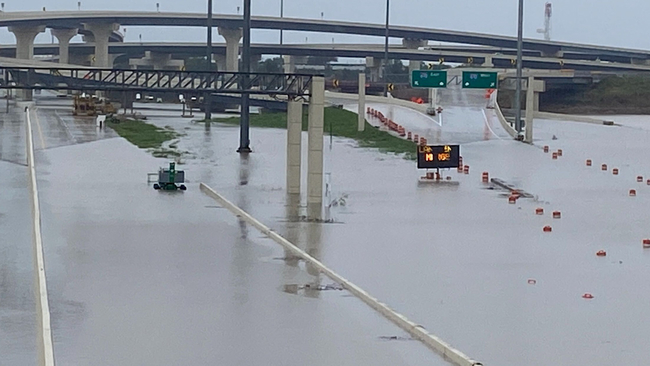