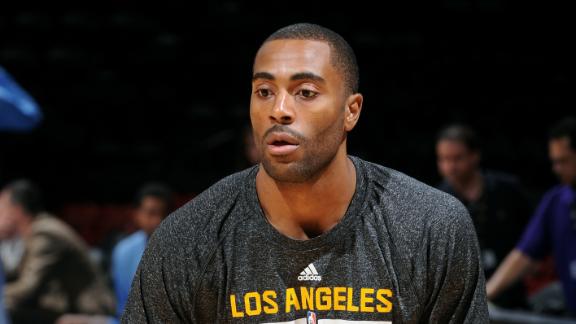 MEMPHIS, Tenn. -- Los Angeles Lakers guard Wayne Ellington has been granted an indefinite absence from the team after his father was shot and killed Sunday night in Philadelphia, the team said Tuesday before their game against the Grizzlies.

According to the Philadelphia Daily News, Ellington's father, who shares the same name, was found shot to death inside his car at an intersection. Police on Tuesday told the newspaper they have no motive or suspects.

"My family and I are devastated by the news of my father's murder on Sunday night in Philadelphia," Ellington said in a statement released by the team. "We appreciate everyone's support and ask that you respect the privacy of our family during this very difficult time."

Lakers coach Byron Scott said it was unknown when Ellington, who played for Episcopal Academy in Philadelphia, would rejoin the team.

"It was just very sad news, obviously, and all of us have to give him space to grieve and deal with this with his family and we'll welcome him back with open arms when he decides to come back," Scott said before his team's game against the Grizzlies.

Scott said that Ellington learned of his father's death Sunday night while walking to his car after the Lakers defeated the Charlotte Hornets in Los Angeles, the Lakers' first win of the 2014-15 season.

"I got the news when I was with my family in the hallway about to go to my car," Scott added. "I obviously kind of dropped everything and went straight to him, spent a few minutes with him. A lot of his teammates were there, as well as his fianc. [Hornets swingman] Gerald Henderson, who he grew up with, was there. He had a lot of support."

Scott added later, "Again, this is our livelihood, but it's still just a game. This thing that's happening with Wayne is real life. It kind of puts everything in perspective, too.

"As a team, we'll obviously keep going on and trying to win games, but I think all of us, every now and then -- during the game, after the game, before the game -- will have Wayne on our mind."

In a release, Lakers general manager Mitch Kupchak said, "Our players are upset for their friend and teammate. Additionally, ownership and all Lakers employees are also saddened by this tragedy.

"Those of us who work with and have gotten to know Wayne have come to know what a wonderful and caring person he is. Our hearts go out to Wayne and his family, as do our thoughts and prayers."

Ellington, in his sixth NBA season, has played in five games this season, averaging 7.8 points off the bench.