Warriors irked by Game 4 loss, confident heading back to Houston 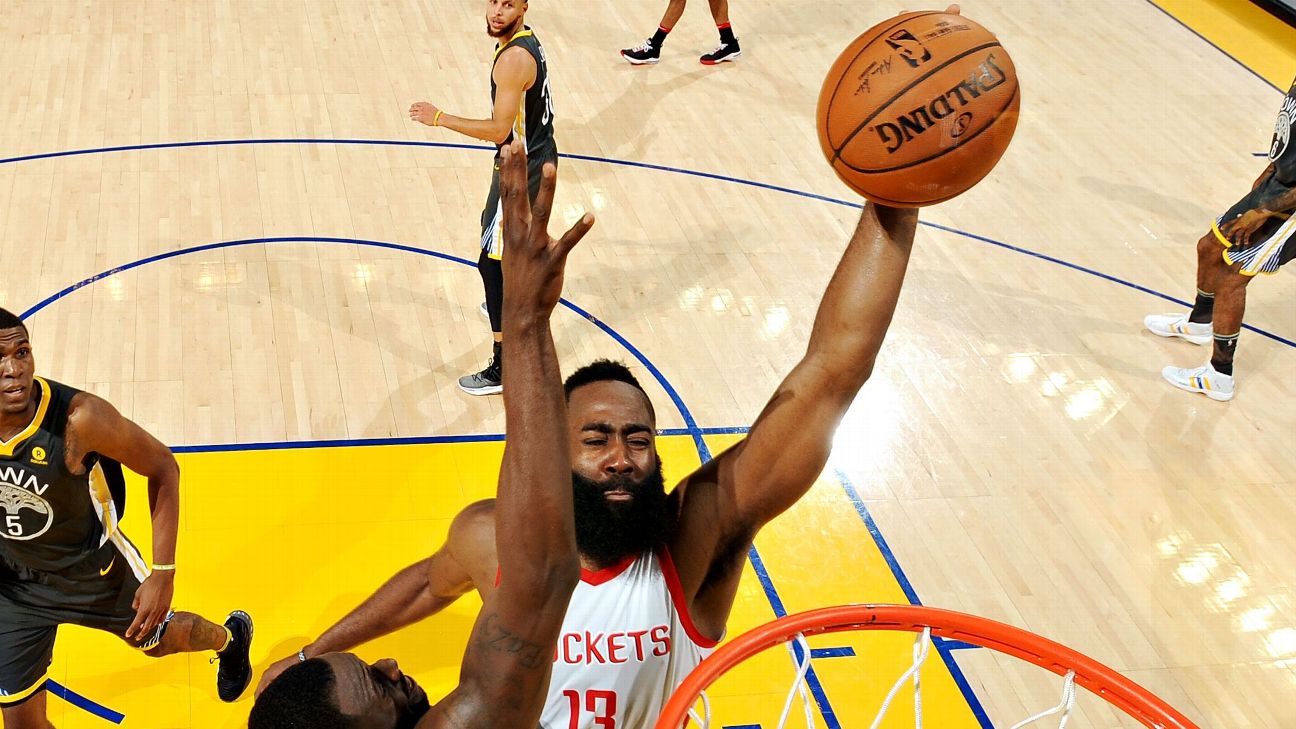 HOUSTON -- The series between theRockets and the Golden State Warriorsis tied at two games apiece, but the Warriors know they dropped the ball prior to heading into Game 5 of the Western Conference finals on Thursday in Houston.

They are still miffed about losing Tuesday's Game 4 at home in a contest they led by as many as 12 points in the final quarter, yet the Warriors are confident they'll overcome the setback.

"[We're] kind of pissed off," forwardDraymond Greensaid after Wednesday's practice at the University of Houston. "We know we let one slip away. So, definitely guys are pissed off, but encouraged, as well. I love the way this team responds when our backs are against the wall. I don't mind our backs being against the wall, because I know what we're capable of, and I know the level of focus and intensity level that this team brings when that is the case.

"It is what it is. I think we blew a golden opportunity, but it's not one that we can't get back. We know we can go get it back, so it's no panic."

The Warriors departed the San Francisco Bay Area on Wednesday morning, and upon arriving in Houston, they headed straight to practice. Watching film was the first objective before taking the court.

"The team's in good spirits," Golden State coach Steve Kerr said. "We're disappointed we didn't win last night, but we're right in the middle of a great series, and we feel good about our prospects going forward. We know we have a lot of things to clean up.

"We've been down this road before many times. We're excited to be here."

Golden State was outscored 25-12 in the final frame Tuesday. During the quarter prior to that, the Warriors had erupted for 34 points and appeared to be on the verge of taking a commanding 3-1 series lead.

On top of coughing up such an important game, the Warriors' NBA-record postseason winning streak at home was snapped at 16 games.

"It's a frustrating feeling, obviously," guardStephen Currysaid. "But we always talk about, with us, we're great at turning the page and being resilient and finding a way to bounce back. So, looking forward to that opportunity tomorrow."

ForwardAndre Iguodala, who sat out Game 4 with a left lateral leg contusion, traveled with the team and participated in parts of Wednesday's practice. He is officially ruled as questionable for Thursday. Kerr said the small forward is feeling better and making progress.

"We're hoping he can play tomorrow," Kerr said. "But we don't know yet."

GuardKlay Thompsonsuffered a left knee strain in Game 4 but played through it after receiving treatment. He went through the entire practice. The Warriors have him as questionable, but team officials told ESPN he will play.

The Warriors will need all the bodies, particularly small bodies, that they can throw at the Rockets. Houston's small-ball lineups have forced Kerr to do away with playing bigs such asZaza Pachulia, JaVale McGee and David West, players who have been in the regular rotation for much of the season.

Kevon Looney and Jordan Bell, two young and agile bigs, have received the nod from Kerr in this series.

Curry believes in those two.

"They're going to help us get two more wins in this series," he said adamantly.

And before finishing his media address, Curry said he feels good about what's in store for the rest of the series.

"It's easy to wake up today and kind of think we lost a huge opportunity, whatever this and that and think negatively," he said. "I woke up this morning thinking we played that bad in the fourth quarter, lost by three points and played a solid defensive game. Like I said, we have a great track record of having bounce-back. So it put a smile on my face getting on the plane coming down here."