Vikes GM: 'All options on table' 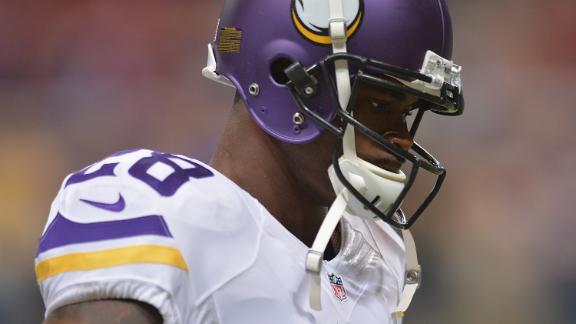 Minnesota Vikings executive vice president and general manager Rick Spielman said Sunday that "all options are on the table" when it comes to how the team will handle the allegations against running back Adrian Peterson.

On Friday, Peterson was indicted by a grand jury on charges of reckless or negligent injury to a child. He was booked into the Montgomery County jail at 1:06 a.m. CT and released at 1:35 a.m. CT early Saturday morning after posting $15,000 bond. He was deactivated for the Vikings' 30-7 loss to the Patriots on Sunday.

"Friday night was the first we heard of the formal allegations against Adrian Peterson, and we decided, as an organization, that to deactivate him this weekend was in the best interest of everybody concerned," Spielman told ESPN's Sal Paolantonio. "We are, as an organization, still in the process of gathering information, and at the end of the weekend we will discuss what we will do going forward.

"You don't want to make any knee-jerk reactions. All options are on the table. You can't take any options off the table because we're still gathering information."

An announcement or decision on Peterson's future could come as early as Monday, according to a league source.

Coach Mike Zimmer said he addressed the situation with the team before Sunday's game.

Peterson didn't accompany the Vikings to Sunday's game. He did, however, tweet a Bible verse on the topic of judging others.

- Adrian Peterson (@AdrianPeterson) September 14, 2014At a news conference on Saturday afternoon, Montgomery County first assistant district attorney Phil Grant said Peterson was charged with one count of injury to a child and could be sentenced to as many as two years in state jail as well as a $10,000 fine. Probation is an option, Grant said, for defendants with no prior criminal record.

On Saturday, the NFL told ESPN.com it would review Peterson's case under the league's personal conduct policy.

Last October, Peterson's 2-year-old son died in Sioux Falls, South Dakota, after being allegedly assaulted by a man who was dating the boy's mother. Peterson learned only two months earlier that he was the boy's father. The man who is accused of assaulting the boy, Joseph Robert Patterson, was charged with murder and manslaughter.

"It's just made me stop taking things for granted," said Peterson, who turned 29 in March. "Life is short. You never know. You just want to take advantage of the time you do have."

Peterson Booked, Released From Jail
Pedro Gomez reports from Montgomery County, Texas, where Adrian Peterson was booked and released on charges of negligent injury to a child.

Adrian Peterson Deactivated For Sunday
ESPN's Adam Schefter breaks down the police report that details the charges against Adrian Peterson of reckless or negligent injury to a child.

What's Next For Peterson?
ESPN legal analyst Lester Munson breaks down how the case against Adrian Peterson will proceed.