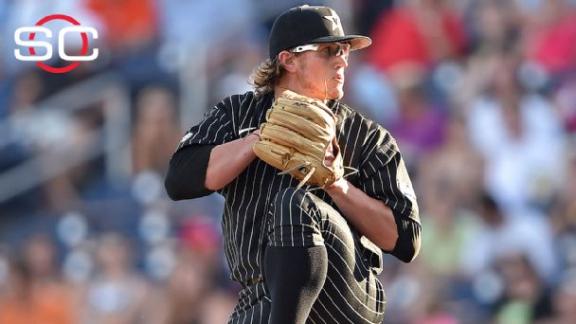 OMAHA, Neb. -- Carson Fulmer knew his career at Vanderbilt was over as coach Tim Corbin walked from the third-base dugout to the mound in the eighth inning.

What a career it's been, and what a way to finish.

Fulmer held Virginia to two hits and struck out eight over 7 shutout innings Monday night, just the kind of outing the Commodores needed in a 5-1 victory in the opener of the College World Series finals.

"It's such a great memory for him to pitch his final game," Corbin said. "That eighth inning was the right time to get him. Personally, I was glad to be able to do that so he would be able to address the crowd and the crowd could address him."

The Vanderbilt section gave Fulmer a standing ovation as he descended the dugout steps. His virtuoso performance left the defending national champion Commodores (51-19) needing one win, Tuesday or Wednesday, to become the seventh team to win back-to-back national titles and the third to do it in the past 10 years.

Fulmer (14-2), the No. 8 overall draft pick by theChicago White Sox, completed his finest season. He was Southeastern Conference pitcher of the year after leading the SEC in wins, strikeouts and ERA.

"What made it big for me was not only did I have Coach there, but the whole infield around me," Fulmer said of his last moments on the mound as a collegian. "To spend that moment with them and to look back at the brotherhood we created, and to win the game, it's a moment I'll remember for the rest of my life. I couldn't have asked for it to happen any better."

Fulmer outdueled Virginia starter Connor Jones (7-3), who allowed three hits over five shutout innings before the Commodores got to him for two runs in the sixth. Will Toffey's two-run double broke a scoreless tie, and Vanderbilt added three more runs in the seventh.

Virginia (42-24), the Commodores' finals opponent for the second straight year, scored in the ninth to end the Vandy bullpen's streak of 22 shutout innings.

"We've been in this situation before this year," Cavaliers coach Brian O'Connor said. "We were in this situation going into Saturday, that if you win you get to continue your season and if you don't, it's over. This team has handled that kind of adversity all year long, and I would imagine tomorrow night will be no different."

Fulmer retired nine in a row from the fifth to eighth inning before Adam Haseley bounced a ball over the left-center fence for a ground-rule double. Ben Bowden came on for Fulmer with two outs and two runners on in the eighth, and got Matt Thaiss to fly out.

"It was just special to see [Fulmer] acknowledged by the crowd and the guys on the team," Dansby Swanson said. "He's meant not so much just to the team, but the university as a whole."

Fulmer attacked Virginia with his fastball all night, and four of his eight strikeouts ended innings.

This is the first finals rematch since Oregon State and North Carolina met in 2006-07.