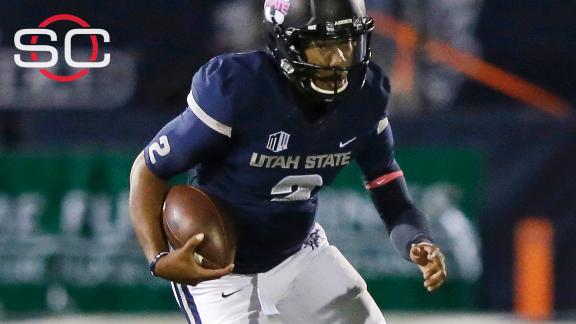 LOGAN, Utah -- Utah State entered Friday night having lost 12 straight games to No. 21 Boise State, with its last victory over the Broncos coming 18 years ago. That streak was all but officially over after two quarters.

Utah State upset their Mountain West Conference rival 52-26 thanks to seven first-half turnovers, including a 90-yard interception return by Marwin Evans as time expired in the half. The Aggies scored 21 points in the final 85 seconds of the first half thanks to two fumbles and the interception.

The 52 points are the most Boise State has ever allowed as a ranked team.

"I don't know if I've ever seen anything like it in the first half," said Utah State coach Matt Wells, who called it "maybe the greatest win in program history. "It's huge. I make no bones about it. I've been saying it -- out of respect -- the road to the championship goes through Boise. 'Til someone knocks them off the throne, it's theirs.

"I told our guys on Sunday, this isn't the championship game, but it puts you in the driver's seat."

Utah State hasn't won a championship in any sport since joining the Mountain West in 2013. The Aggies lost 50-19 in this meeting last year.

The Broncos served up four fumbles and three interceptions in the first half, including Evans' score at the end of the half.

The Aggies defense ruled the day with a historic effort. The eight total turnovers were the most since forcing seven against Arkansas State in 2003 -- and matched that in the first half.

Boise State receiver Thomas Sperbeck fumbled the ball away on the second snap of the second half.

"You try to stop the bleeding as fast as possible," Boise State coach Bryan Harsin said. "You've got to go make plays. You've got to hang on to the football.

"[We] need guys to work together. We need to create some field position in our favor. It just didn't go that way."

Harsin called Utah State's Kyler Fackrell one of the best in the country earlier in the week and the senior linebacker didn't disappoint. He finished with 11 tackles, 2.5 for loss. He also forced a fumble and recovered two. Fellow linebacker Nick Vigil had a game-high 14 tackles, nine in the first half, two sacks, a forced fumble and a fumble recovery.

"I've never been a part of anything like that, that was amazing," Vigil said of the turnovers. "Even our defensive coordinator said, I don't even know what to say right now.'

"This is obviously a huge win, but it doesn't mean nothing if we don't do anything the rest of the season."

Jalen Davis, Torrey Green and Evans all picked off Boise State quarterback Brett Rypien in the first half.

The Broncos had 10 first downs and the seven turnovers in the first half and allowed 35 points off those turnovers. The Boise State offensive line was simply overwhelmed in the first 30 minutes and Rypien was regularly under pressure.

Rypien threw for 299 yards with three interceptions. He entered the game with one interception in four games. Sperbeck had a game-high 156 yards receiving on six catches. Running back Kelsey Young ran for 60 yards and two touchdowns for the Broncos.

"We didn't protect the ball," Boise State safety Darian Thompson said. "The only thing we can do is get back to work."