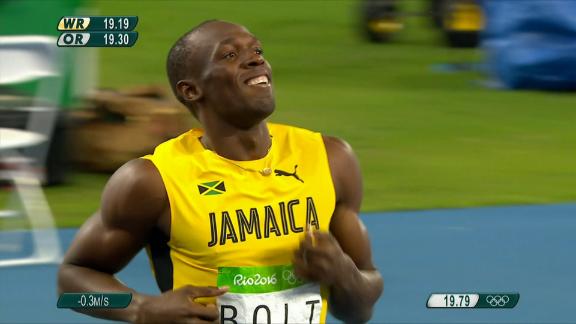 Usain Bolt says he was as surprised as anyone when Justin Gatlin failed to advance to Thursday's 200-meter final.

"Everybody's in shock," Bolt told BBC Radio 5 Live of Gatlin after the Jamaican advanced with the top time in Wednesday's semifinals. "You can tell from the 100 meters he's getting old. It's a fact the older you get, the rougher it gets to double."

In the evening's biggest stunner, Gatlin, who has given Bolt more run for his money than anyone else over the past four years, finished third in his heat.The American said he rolled an ankle in the run-up to the Olympics and was happy just to make it here.

"Probably, I should have rested it instead of running on it," said Gatlin, who finished second to Bolt in the 100.

In Bolt's semifinal heat, the Jamaican star smiled and wagged his finger at a brash up-and-comer. Bolt's main goal during the opening rounds is to conserve energy, which is exactly what he was doing when he looked to his right, saw Canada's Andre De Grasse a few steps behind him and put it on cruise control.

The only problem was that De Grasse, the bronze medalist in the 100, didn't back down. He sped up, and suddenly the two were nose-to-nose, peering and smiling at each other down the stretch. Bolt finished in 19.78 to win by a scant 0.02 of a second. He wagged his finger at De Grasse as they crossed the line.

"That was really unnecessary," Bolt said. "I don't know what he was trying to do. He's a young kid. He's great. He has a lot of talent. I'm looking forward to the competition in the final."

Bolt will go for his eighth Olympic gold Thursday.

Bolt, who has his eyes on not only the win but maybe also another world record, is hoping his time will come Thursday night.

"I definitely think I can try for the world record," said the sprinter, whose current record in the 200 stands at 19.19 seconds. "But now, it's executing right, running the corner efficiently and coming in the straight and running the perfect race."

But the 29-year-old Bolt also acknowledged that age is catching up with him, telling the BBC he has no plans to run the 200 meters in the 2017 world championships.

WATCH: Bolt cruises into 200m final
Usain Bolt once again showed his world class ability as he advances to the 200m final.