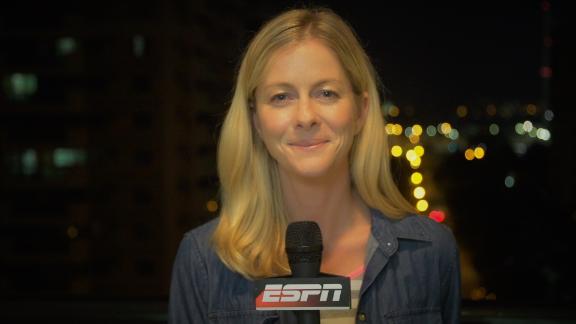 The U.S. finished the race third but was disqualified because leadoff runner Mike Rodgers was ruled to have passed the baton to Justin Gatlin outside the first exchange zone of the relay, won by Usain Bolt and Jamaica.

The disqualification elevated Canada to the bronze, which it will keep. Japan won the silver.

Video replays showed a clean handoff from Rodgers to Gatlin but were less clear about whether Gatlin had taken possession of the stick before Rodgers got it inside the start of the 20-meter passing zone.

"It was the twilight zone. It was a nightmare," said Gatlin, who along with his teammates found out about the disqualification while parading the U.S. flag around the track. "You work so hard with your teammates, guys you compete against almost all year long. All that hard work just crumbles."

Tyson Gay, who ran the third leg for the Americans, called it bad luck.

"It's always something weird, stupid, simple mistakes that always cost us, and I don't understand," he said. "We had great sticks in practice, great everything, and something so simple. I can't say anything but bad luck."

The ruling marks the ninth time since 1995 that the U.S. men have been disqualified or failed to get the baton around at the Olympics or world championships.