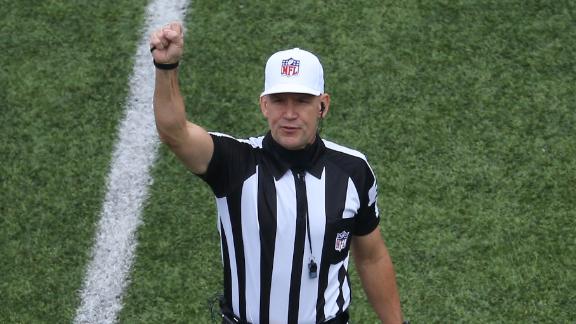 In a release, the NFL Referees' Association says the NFL has "caused confusion for NFL officials as to what the league does and doesn't want called."

The union referred to penalties on Washington's Chris Baker for a hit on Eagles quarterback Nick Foles on Sept. 21, and to Chiefs safety Husain Abdullah on Monday night for going to his knees to celebrate an interception return for a touchdown. Abdullah actually had gone to his knees to pray -- an act exempted from celebration penalties.

The union says both calls were graded as correct even after NFL executives announced that they were incorrect. Baker got a 15-yard penalty and was ejected from the game at Philadelphia. Abdullah also received a 15-yard penalty.

"Consistency in penalty enforcement is extremely important to the players, coaches and fans. Uncertainty as to what the league wants called is not a road you want to go down," said Jim Quirk, executive director of the NFLRA.

Quirk noted that Baker was penalized for a blindside block on Foles as a personal foul. A brawl followed near the Washington sideline, and Eagles tackle Jason Peters was also ejected.

Two days later, Troy Vincent, the NFL's executive vice president of football operations, said the hit was legal and should not have been penalized. Yet, the NFLRA said, the league's officiating department a day later graded the call as correct.

In the case of Abdullah, a devout Muslim who took off a year from football to go on a pilgrimage to Mecca, the league said Tuesday that the penalty was in error.

The NFL responded with a statement Thursday.

"The officiating supervisors recognize that for an incorrect call on a close judgment play the official may have used appropriate reasoning," league spokesman Michael Signora said. "On such a call, the official is not downgraded."

Signora went on to address each situation. In the case of Foles, he said, "It was not a foul because the quarterback was pursuing the play, the contact was not to the head or neck area, and the play was not over. However, the referee -- watching the play at full speed and without the benefit of a replay review -- judged that the block was late and threw a flag. While not a correct call, we understand why it was made."

As far as Abdullah, Signora said: "A player who goes to the ground as part of religious expression should not be penalized. While he did slide immediately before beginning his prayer, this was not a correct call and the play should not have resulted in a penalty."

Regardless, said former NFLRA president Scott Green, a recently retired referee, there's a communications problem between the NFL and its game officials.

"It seems there is a disconnect between what the officiating department expects from officials and the public statements being made by league executives," Green said. "It certainly creates uncertainty for the guys making split-second decisions on the field."