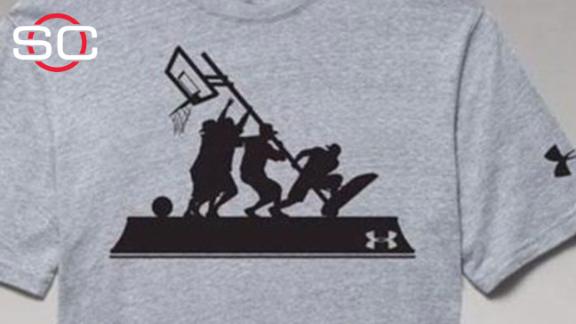 Under Armour said Saturday it had stopped selling a shirt displaying a silhouette of basketball players hoisting up a hoop stanchion after its similarities to a famous U.S. war memorial statue caused some to say they were offended by it.

The shirt, labeled on Under Armour's website as "Band of Ballers," bears a strong similarity to the U.S. Marine Corp War Memorial at Arlington National Cemetery. The statue, also known as the Iwo Jima Memorial, features a group of soldiers planting a flag during the Battle of Iwo Jima (1945), which resulted in 26,000 American casualties.

"Under Armour has the utmost respect and admiration for the men and women on active duty and veterans who have served our country," the company said in a statement. "As such, we deeply regret and apologize that a t-shirt that was not reflective of our values in honoring and supporting our country's heroes went on sale. We have taken immediate action to remove it from retail and will take great measures to ensure this does not happen again. Supporting those who serve our country has been part of our brand's DNA since the very beginning, and through our partnerships and by working directly with military organizations, it will always serve as the foundation of our efforts to give back."

The misstep is uncharacteristic for the brand, which has dedicated some of its resources in recent years to veterans injured in battle.

Sales of Under Armour gear have generated more than $3 million to the Wounded Warrior Project and college football teams who are under Under Armour contract have worn special jerseys dedicated to those who have sacrificed their lives in battle.