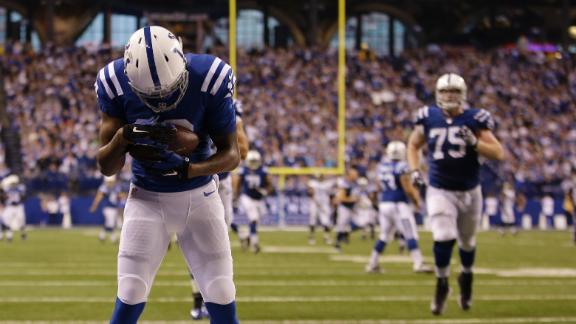 INDIANAPOLIS -- Colts receiver T.Y. Hilton followed through with a touchdown for his newborn daughter.

Hilton caught a 73-yard touchdown from Andrew Luck in the third quarter Sunday against the Jacksonville Jaguars.

Once he got into the end zone, the receiver cradled the football as if it was his baby daughter.

"I was holding her and just walking at about 11:15 [a.m.] then I said, 'Baby you want the game ball or touchdown ball?' That was my goal, to get both of those for her," Hilton said.

Hilton's wife, Shantrell, gave birth to their daughter, Eugenia, early Sunday morning. The timing of the birth led to speculation as to whether Hilton would play Sunday.

But Hilton's agent, Erik Burkhardt, announced on Twitter that Hilton would play and also planned to score a touchdown.

After the Colts defeated the Jaguars 23-3, Hilton took to Twitter to share a picture of his newborn.