Troy Tulowitzki to have MRI after X-rays on ribs, chest negative 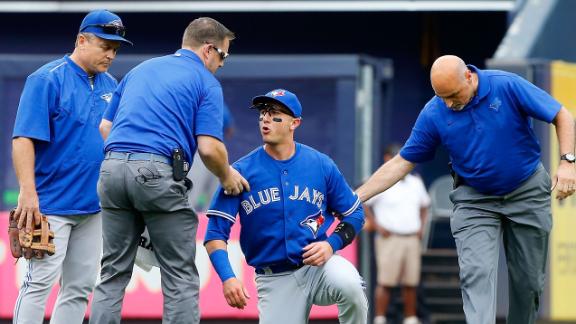 NEW YORK -- Toronto Blue Jays shortstop Troy Tulowitzki left the opener of Saturday's doubleheader against the New York Yankees after being involved in a collision at the end of the second inning.

X-rays on Tulowitzki's ribs and chest were negative, the Blue Jays announced. The five-time All-Star will undergo an MRI later Saturday, and the team expects to receive the results of that exam Sunday.

"Just got hit in the back. Looked like he might of hyperextended it, but I don't know what's going on with him," right-hander Marco Estrada said.

Tulowitzki backpedaled on Didi Gregorius' popup behind second base, while Toronto center fielder Kevin Pillar raced in. As Tulowitzki made the catch, Pillar smashed into the shortstop's upper back.

As Tulowitzki fell to the ground, the ball dropped to his side, but the umpires ruled it an out. Tulowitzki stayed on his back for a minute or two as a trainer and Blue Jays manager John Gibbons attended to him. Tulowitzki eventually walked off the field very slowly under his own power.

Tulowitzki was replaced in the game by Cliff Pennington, who went to second base, while Ryan Goins moved to shortstop. The Blue Jays won the game in extra innings, 9-5.

Tulowitzki, 30, has a history of injuries that have limited him to an average of just 88 games per year over the previous three seasons. In 125 games this season with the Colorado Rockies and the Blue Jays, Tulowitzki is batting .279 with 17 homers and 70 RBIs.