Troy Tulowitzki says he was 'shocked' by trade to Blue Jays 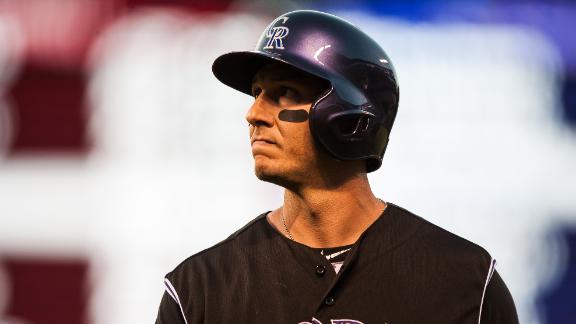 Count Troy Tulowitzki among those shocked by his trade late Monday night from the Colorado Rockies to the Toronto Blue Jays.

"I felt like I got blindsided a bit. I thought I was in the loop, in the conversation," Tulowitzki told The Denver Post on Tuesday afternoon. "So it definitely caught me by surprise. I was shocked, and it caught me off guard. I think maybe I was a little naive to think I would be so connected to the [trade] process."

A five-time All-Star shortstop, Tulowitzki, 30, had spent his entire nine-year career in Colorado after he was drafted seventh overall in 2005. He was pulled in the ninth inning of Monday's loss to the Chicago Cubs as the Rockies finalized the deal.

"They told me they would keep [me] in the loop, and that if anything got serious, they would talk to me about it," Tulowitzki told the Post. "So, to get pulled out of the game in the ninth inning and be told I was traded, I was shocked."

Manager Walt Weiss, who also was caught off guard by the move, delivered the news to Tulowitzki, and the two spent an hour together in the manager's office after the game. In addition, Tulowitzki spoke by phone with general manager Jeff Bridich and owner Dick Monfort, The Denver Post reported.

"I want to thank all of the Rockies fans for their support," Tulowitzki said. "I will always remember the Tu-lo chant every time I came to the ballpark. It put a smile on my face every time."

However, Tulowitzki said, he has "no reason to look back."

"I get the chance to play for a contender, and maybe this will revive my career a little bit," he told the Post.

Tulowitzki is expected to join the Blue Jays in Toronto on Wednesday. The destination in addition to the trade itself came as a surprise.

"I knew their GM [Alex Anthopoulos] had kept tabs on me for a long time, so it feels good to know they wanted me this much," Tulowitzki said, according to the Post. "I had heard all the media reports, and I never heard Toronto. You always hear the Mets, or the Cardinals, but to hear I'd been traded to Toronto was surprising."

Tulowitzki said the sudden transition won't change his approach to the game.

"I know that those who know me, know that I come to the field every day to try to win," Tulowitzki said. "At times this year, and in the past couple of years, we have not done as much as I would have liked to make us a winner. So that being said, I'm moving forward with a smile on my face. I'm ready to move forward."

Information from ESPNChicago.com's Jesse Rogers and The Associated Press was used in this report.